Every Wednesday, Chris from Smart Football puts on his sturdiest of work clothes, leaves Brown Manor, and lowers his overall IQ by spending a few moments with us helping the masses understand a bit of actual football through questions submitted by you via our Twitter feed. If you have a question about football strategery, tactics, fluid dynamics, tort law, or orchid taxonomy, please submit them to us at twitter.com/edsbs . Enjoy.

Question from @cdbarker: Is it possible to successfully use two quarterbacks of similar but divergent styles effectively, ie Tate and Denard?

The traditional wisdom -- and it is a notion I generally have agreed with -- is that having two quarterbacks is a euphemism for not having any. There are a few interesting counter examples, though none are truly compelling, like Mark Richt rotating D.J. Shockley and David Greene, or Spurrier rotating Doug Johnson and Noah Brindise every other play against Florida State. But, generally, it is a bad recipe. There are lots of reasons, but none may be more important than simply repetitions in practice. If you have two quarterbacks the receivers have to get used to both; the gameplan has to be taught in detail to both, film must be gone over with both, etc; and then there's that old saw about "rhythm" and how it is disturbing with different guys in the huddle. I don't find those latter ones all that persuasive, but there is at least a little truth to them.

But I think the winds are changing, and a two-quarterback system is quite possible.

At its best you are likely to have the system Florida used to win the 2006 title: a starting quarterback in charge of most of the offense (Chris Leak), and a second guy with special abilities for whom a package is installed (then-freshman Tim Tebow). This example has now been made universal throughout football under the nauseatingly overused rubric, "the wildcat." (Had "wildcat" been around in 2006 think of all of the puns Dan Shanoff could have used to describe how Meyer used his young talent.) The reason that works though is because you choose a starting quarterback for one set of skills (passing, reading the defense, making checks, accuracy, some athleticism, etc) but another guy opens up a new dimension because of their running ability, and the spread with a mobile guy gives the offense certain numerical advantages it doesn't get with an immobile quarterback. 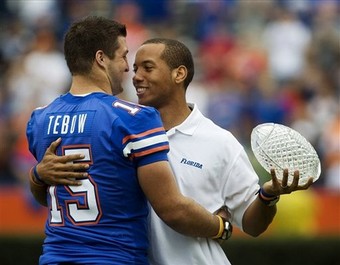 A beautiful marriage, when it works.

Aside from this though there are other forces pushing towards a two-quarterback system being right. One is the no-huddle offense, be it in its super fast forms or the kind where the play is signalled in from the sideline. Having eliminated the huddle, it is no big deal for a different triggerman to run onto the field; most of the players get the playcall from the sideline anyway. Indeed, this might be a bit overblown, but I think the no-huddle reduces the "field general" role for the quarterback to something more akin to a point guard or ball distributor. In ye olden days, guys like Bart Starr or Johnny Unitas not only played quarterback as we think of it now, but called all their own plays, made all the checks at the line, and made all the adjustments themselves. Contrast that with today. Gary Pinkel, the head coach of Missouri, remarked in a clinic that his squad hadn't called a single audible in the last three years because of their no-huddle spread -- all the calls came in from the sideline. With this "plug-n-play" approach substituting a new changeup quarterback isn't such a huge deal.

Finally, the "rhythm" and practice time aspects. This is where the question is a good one, and the key language is in "similar but divergent styles." There is little point (sorry Ol' Ball Coach) in rotating guys who have basically the same skill set. Even if they are close in talent your team gains more benefits if the team picks a guy and develops him. If the Michigan hubbub has taught us anything, it is that there is only a limited amount of time to directly coach up players. But if they bring different skill sets, then it is worth it; the starting or "main" quarterback can still work on all the passing drills necessary while the other one works on their "package." The fact that this change-up package includes some passes doesn't change that.

The rhythm or leadership stuff I buy less, but that is a judgment every team is going to have to deal with. I don't buy that a quarterback has to play every single snap to be a leader. In basketball, even Michael Jordan and Lebron James head to the bench sometimes. And seriously, how much more can your rhythm be thrown off than running a simple hand-off play? I think much of that talk from quarterbacks -- often NFL guys -- is mostly hubris. But, again, each coach will have to determine where the leadership comes from and whether his guys can handle it. Every decent player wants to be out there every play; you just have to find a way to make it work. I think the two-quarterback stuff is very viable, and will continue to be as offenses get more and more multiple, and roles and packages get more and more specialized and diverse.

Chris contributes here at EDSBS every Wednesday during the football season. Ask him questions by dropping a tweet at twitter.com/edsbs. He just figured out what's causing that squeaking noise in your refrigerator and fixed it, and you didn't even bother to thank him. Dick.