Share All sharing options for: FULMER CUP 2009: THE FINAL TALLY 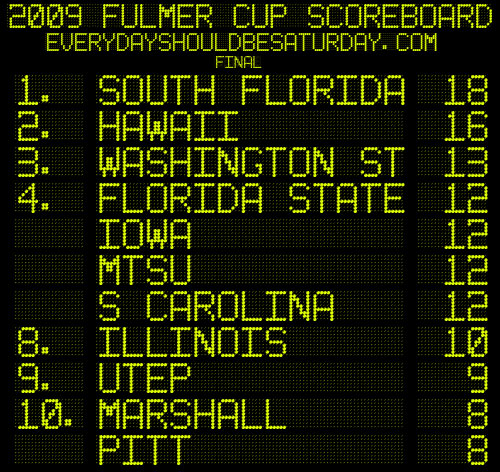 Oh, they were so close to letting it slip from them, but a single incident of unpaid parking tickets qualified the USF Bulls for the Fulmer Cup team competition. That's how teams function: even the smallest of players can, at the last moment, make a small contribution to block the extra point, open up a running lane, or get a driving on a suspended license charge to put USF into the Fulmer Cup race on a team basis, and thus nip the Hawaii Warriors in a low-scoring 18-16 tussle for the Fulmer Cup crown. Barrington was on the team and enrolled at USF at the time of the arrest, so the points stand.)

Sluggish scoring was partially to blame, but the aberration of USF's title really comes as a tribute to the Ellis T. Jones Winner this year, Trent Pupello, the man who singlehandedly pistol-whipped USF into contention one fateful night in a parking lot. You can always blame Florida for the dubious honor of the crown, as Pupello was a transfer from Florida.

The Fulmer Cup is now closed until the cold, deathly embrace of the offseason reaches us again. Huzzah! Go in peace.

Thanks as always to Brian and SAS Wiki for keeping this going. ONE HUNDRED COCKTAILS all around.