POOF! of smoke. Joe Cox, the Ginger Ninja appears suddenly in front of you. 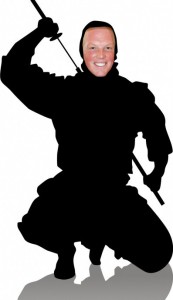 Oh, you doubt the powers of the Ginger Ninja. Deploy him into Stillwater the week before a game, and behold the wreckage his silent powers hath wrought!

--Secret ninja love potion made starting tight end go crazy and get the boot from team.

--Oh, and in Ginger Ninja's most outstanding work, quarterback Zac Robinson is doubtful for Saturday's game due to "undisclosed injury," which we all know is really "throwing star thrown at high speed into neck, but not from too far, because ten yards is a long way."

Fear my silent wrath! Only lack of sunscreen can stop the Ginger Ninja! Now to practice to throw floppy post patterns of deceptive lethality and prepare to hand off 40 times against Oklahoma State for flawless victory. It was nice not seeing me, wasn't it?

POOF! The Ginger Ninja disappears, leaving only a cloud of smoke and the smell of SPF Eleventybillion Behind...

Update! Ginger ninja may have missed target, according to OSU spokesperson!