Segway! Segue! Thing transitioning you from one topic to another! 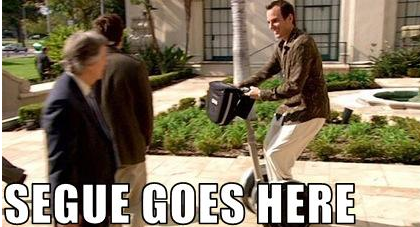 Gary Pinkel will send you to hell, child. "Future Chase Daniel" Blaine Dalton now becomes "future D-11 quarterback" with his dismissal from Missouri for an on-campus DWI. The incident is the second incident for Dalton, who was charged with driving with an open container earlier this summer. He also had a third incident where no charges were filed when pills belonging to a friend were found in his car, so three made a trend for Pinkel, who gave his qb of the future the boot from campus. (Soft boot or hard boot remains to be seen; he may be able to get back on the team with good behavior and time, but DWI with no style points (i.e. hitting a donkey, ridiculously high BAC, etc.) gets you two points in the Fulmer Cup.

Stealing Georgia's thunder already. Oklahoma State is already attempting to pre-empt Georgia scoring, and is doing it by biting their style, too: senior DB Perrish Cox pulled a page from the Bulldog playbook by picking up a measly one-point suspended license charge in Stillwater. Let us congratulate the Dawgs, btw, on an offseason free of license-related foolishness or other driving charges. Either they hired the driving paperwork coordinator we'd always said they needed, or more likely than not someone performed an exorcism to rid the roads of the spirit of Mudcat Elmore's car. For the 20 Georgia fans who got that reference: you're welcome.

The Fulmer Cup ends at noon on Wednesday. If anyone's going to rob a bank or pistol-whip an elephant, now's the time to do these things.