Share All sharing options for: MUSTACHE WEDNESDAY, ONE: MIKE HARTLINE

Mike Hartline wants you to meet his mustache. We call this one "The Syrian Exchange Student," and it must be immensely popular since it has its own Facebook group and everything. It just looks so lost and helpless out there on his face, doesn't it, standing out there in the hallway in those overly pleated pants pulled way too far up on its waist? Help it find third-period trigonometry, the poor thing. 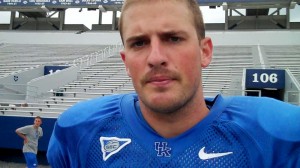 Later, the mustache will get handsy with you at a dance and proclaim its undying love before getting stalk-y for a few weeks just like all exchange students do, but they do love differently in the rest of the world. It's a devoted, molest-y kind of love. How's that different than the kind of love we practice, you ask? We can afford better surveillance equipment, that's how it's different.

(Still later, the Syrian exchange mustache will go through an awkward hip-hop phase. You should defriend him by this period.)