Share All sharing options for: BRANDON SPIKES IS TERRIFYING, ETC. 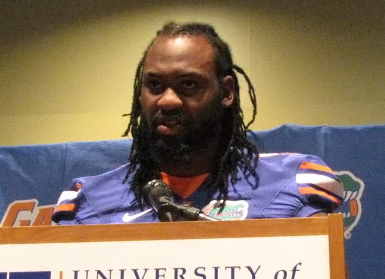 My god, does Brandon Spikes look like he just got done with a six month deployment eating landmines in Tora Bora. He's obviously been fed straight rage hormone and velociraptor eggs for the offseason, mutating him further from his human self into a kind of hip-hop lumberjack Wolverine on a three week bender of bar-fighting and barehanded sustenance hunting. On further review, he may very well be the son of Professor Badass. He looks mean, like he's challenging the Ebola virus to hand-to-hand combat. He'd win.

Posting will resume bright and early tomorrow with an announcement at eight a.m. tomorrow regarding the site, ours truly, and the VERY FUTURE OF MANKIND ITSELF, or at least the site. It's all good news, much like Brandon Spikes and Tim Tebow talking about how much more awesome they could be still despite one of them continuing to wear the Orange And Blue Crocs of Divine and Oddly Spongy Inspiration. Now, if you'll excuse us, we're going to start scraping together $44,000 together for a Gator Den, and an extra $10K for the damage we'd do to it.