A WORD OF KINDNESS FOR THE ENEMY

Share All sharing options for: A WORD OF KINDNESS FOR THE ENEMY

If an Eric Berry campaign for the Humorless, Trademark-obsessed Farting Stiffarm Trophy of Note truly has been launched, then we would like to get on track early and often as supporting this as a commendable, thoroughly laudable, deserved, and hopefully successful piece of marketing: Eric Berry for Heisman. 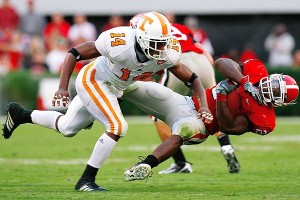 Not that the Heisman would ever be able to spot the sometimes elusive but no less important value of a defensive player to the overall welfare of a team, or has ever been able to do so save for the case of Charles Woodson, who stole the trophy from Peyton Manning in the first place and had to rely on his explosive ability as a kickoff returner to get his name in the great hat of potential winners in the first place. (In typing this, we have satisfied the requirement of our agreement with Holly that as a contributor to the site, her pay will be in mentioning the "theft" of the Farting Stiffarm by Woodson whenever this topic comes up. Strictly contractual, you see.)

Berry really is a one man asphyxiation plan when properly employed, however, the rara avis who at 5'11" and 203 can guard any receiver one-on-one and knock a running back's balls off if necessary. Go back to the weight and stats: Berry is rivalled in the SEC by only Rennie Curran of Georgia for his blend of sheer asskick weight and speed, and plays a position where he can get around the ball and read coverages even more than Curran. A fast-twitch ninja with brilliant ball skills, we'd take him in a heartbeat on our own team without hesitation.

Just wanted to get that on record before the season begins in earnest, and we have to pretend like he's the devil and everything bad and wrong with the world.