Share All sharing options for: GREAT MOMENTS IN JUXTAPOSITION

Georgia commit and highly esteemed recruit Garrison Smith is a devout Christian who has decided to remain abstinent until he finds his future wife. We did the same thing, but not by choice, of course--there's only so many ladies turned on by 20 sided tie and fireworks burns on the carpet indoors. Smith is doing it for religious reasons, something he realizes will make people point and laugh at him in Muntzian style:

"I know a lot of people will laugh at me, but I'm trying to practice abstinence," Smith said. "That's a big thing for me."

When he plays angry for Georgia, at least you will know why he is so angry and frustrated. Fighting Beavers will wear any man out, especially if you're attempting to keep their snapping jaws at arm's length, a visual that has to be the sole explanation for wearing this t-shirt in your interview with Rivals: 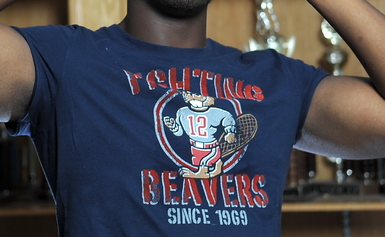 Fighting Beavers. We do the same thing, Garrison, though usually for no longer than 2 minutes at a time, and in a very different way than you would.