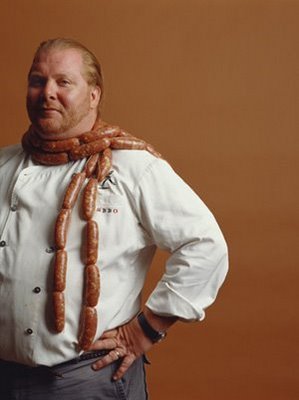 --Grew weed on his roof during college

--Spent most of a key internship in London under Marco Pierre-White allegedly fired up on cocaine while attending Joy Division concerts.

--Would polish off a case of wine at a time with his business partner Joe Bastianich during a single meal.

--Was, in his day, a highly successful ladies' man despite his girth.

--Quoted from Heat about his tenure at the pizza cafe Stuff Yer face: "I don't want to come off as a big druggy, but when a guy comes into the kitchen with a pizza pan turned upside down, covered with lines of crack, how can you say no?"

--Banned noted chef and dick Gordon Ramsay from his restaurants.

--Fond of hog jowl, offal, parts, and other delicious entrails and discard meats.

--From Wikipedia: "Often, the chef's mouth and drinking habits get him into trouble, like when at the 2009 South Beach Food & Wine Festival, as the MC for a $1,000-a-plate dinner honoring the King & Queen of Spain the Miami Herald reported Batali releasing a string of profanities while on stage introducing Spanish chef Jose Andreas, and then proceeding to dry-hump Andreas. "

For all of these and his shameless self-promotion--plus the fact that he's on our list of people to get completely trashed one day with, if only for the food--we salute you, Mario Batali, and all the fatty goodness you stand for. Chin-chin.

Holly: Campers, it's time to start your interior conditioning programs for tailgating season. Without proper summer workouts, your systems will balk at the first combined assault of hot wings, molten cheese, and mimosas mixed in a plastic bucket. To that end, our sommelier recommends: Pizza beer. Why? Because it apparently exists, and that's reason enough for a Friday.

The Spicy Living Test Kitchen has never actually tasted this alleged concoction, but The Onion AV Club did a while back, with reviews ranging from "It's not nearly as bad as it sounds" to "I'd rather just have a beer-flavored beer."

Orson: Tequila. Silvery-tongued bandita with perfect tits heaving under the sole cover of a bandolier of ammunition, borne aloft by angel's wings and a jet pack, soaring naked just out of reach...oh, tequila, you turn me into a lovestruck mad scientist.

Best served just cold enough to take the ethyl edge off it, tequila probably is the liquor inspiring the greatest instant gag reflex for anyone reading this, and that is because at one point you disrespected her, and she shot you dead and left you die vomiting in the desert somewhere around 4 a.m. for the offence.

Shame on you: when balanced properly with the right mixers, attitude, and a enough food in the belly, tequila really will turn you into a more brilliant lunatic than you ever imagined yourself being. Normal alcohol: swimming naked. Tequila: swimming Lake Nantahala naked with the company of ten total strangers you talked into joining you. That's what tequila has done for me, and it can do the same for you, provided you show the proper respect for the drink with the highest risk/reward ratio of any of the major alcohols in the canon. It worked for Ty Webb, after all, and he never made a single mistake in his life.

It's not just for shots, and if you're drinking the cheap, formaldehyde-laced shit, it's most definitely not for shots. (Don't bother with the salt and lime if you don't have to if you're shelling out for Patron or its compatriots: it goes down smooth enough, especially if chilled, and all that squirting and tossing can get confusing, especially after a shot or five.) You could go Tequila Sunrise, but the outlaw TNT is a pleasant surprise: Tequila and tonic mixed in the proportions of your choosing, garnished with lime, and consumed slooooooowly, lest the slow infusion of genius overwhelm your mainframe. 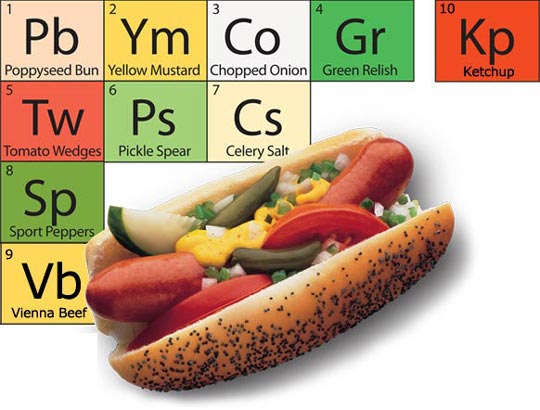 I have not a drop of Chicago extraction in my blood, but I do like what they do with their street food and admire their violent eschewing of ketchup. I have been informed that this is a reliable recipe for its proper construction. Should you disagree, please say so in the comments, calling into question as many of your fellow readers' relationships with their mothers as is convenient.

Orson: Runny Eggs. The French were being devoured by wolves on the streets of Paris as recently as the 13th century, according to the papers of Thomas of Aquinas. They have as a result spent a lot of effort getting their revenge on the world, becoming the foremost practitioners of a brand of cooking demanding maximum animal cruelty with a flair for shoving the carnivorous in your face whether you like it or not, stuffing animals inside of animals, grinding their innards into tasty sausages, and overfeeding geese until they cannot walk in order to feed on a paste made from their swollen livers.

Runny eggs would be low on the cruelty scale, French-wise, but the practice of cooking just enough of the egg to ensure that when you cut into them a yellow goo oozes all over the plate is inspired, indeed. You take something as simple as an egg, and yet still prepare it in a manner reminding you that even when you're eating an egg, you're taking a potential life, covering it with hot sauce, and greedily vacuuming it up with a fork. Nevermind that it is delicious, as well, especially when you start sopping up the yellow gold with toast to clean the plate. It's a bit diabolical when you get down to it, and if you can have diabolical for breakfast, then by all means, devil my plate up a bit, chef.

Holly: Previously on Spicy Livin', we learned the many entertaining dangers of airbags. Here's a refresher course, and please, do try this at home:

Orson: My, this is far more disturbing than we thought it would be.

Orson: The New City Nobleman, aka the Honda 135i Motorcyle, Asian Edition. A mere 135 cc due to Taiwanese import restrictions, and for good reason: the Taiwanese drive with such reckless and creative negligence that their lawmakers instinctively recognized putting their subjects in anything more powerful than 175 cc would be akin to handing out automatic weapons and PCP at high schools and hoping nothing bad happened.

Thus my faithful steed topped out at 70 mph or so, even though it looked enough like a real motorcycle: 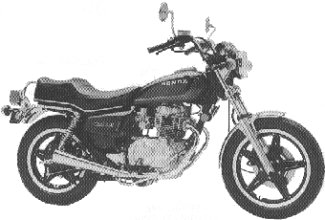 It also had the words "New City Nobleman" painted on the gas tank, an elegant choice when you survey the other possibilities offered by Taiwanese scooters and motorcyles: "Jog, The Happiest Scooter on Earth," or "Century 150: Made for Cutting Wind." (Both are actual names and slogans.) I did everything possible to kill this motorcycle. I dropped it drunk coming home from a long night of drinking at the fish stand down the road. I neglected it mightily, sometimes to the point of hearing parts scraping against parts. I hammered its overtaxed engine up roads with people on the back of it.

I even crashed it into the side of a car outside the Clinton Karaoke bar, bending the handlebars at a 90 degree angle, knocking the headlight cockeyed, and putting it halfway under a sedan driven by a drunk man who blocked the road by essentially parking across a busy two lane road. He paid me $450 to go away without calling the police, I agreed, and a day later I not only had a new tailpipe scar the exact shape of Taiwan, I had a $200 dollar surplus from the accident. You know you have a special vehicle when even the scars it gives you are memorable, and its accidents profitable.

Holly: In honor of the 40th anniversary of the first moon landing, the Saturn V rocket. 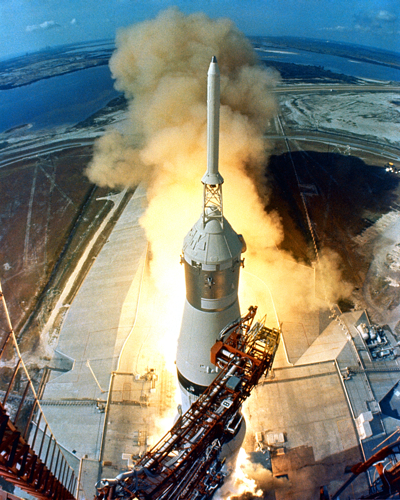 If you'd like to kill the rest of your workday, check out the live simulations of the Apollo 11 mission at We Choose The Moon. And if you're a real space nerd, check out the frequently updated public photo archives NASA has published here. I could wallpaper my house with these. (Saaayy....)

Holly: Shark Week is a mere two weeks away. If you just can't wait that long, pick up the 20th Anniversary DVD collection, featuring an awesome hologram of an attacking Great White on the cover, or the just-released Great Bites Collection on blu-ray.

(NB: The Discovery Channel does not pay me to endorse Shark Week or Shark Week products, but if they decided to start I think I could live with myself.)

Orson: Enter the Wu-Tang (36 Chambers). It's a like a bunch of oddball kids who would be playing D 'n D and hanging out in marching band were instead set loose in the barren projects of Staten Island, given a dazzling array of cheap narcotics and crates full of old records, and set to simmer on a steady diet of B-rate kung-fu flicks. T.S. Eliot once said that Ezra Pound was particularly amazing because he had, on his own, become a Modernist on his own, and had no mentors. Wu-Tang appeared out of nowhere in similar fashion, making the track-for-track classic out of a cloud of weed smoke, inhalants, and dogeared comic books.

The hair on the back of my neck still stands back when Ghostface flies in on that first track, if only because he raps himself into incomprehensible ribbons. So does everyone else for that matter, going free-association without fear or hesitation, dropping verses and stop-starting phrases whenever it suits them, including Ol' Dirty Bastard, who drops the refrain on "Shame on a N****" to scream "I'LL FUCK YO' SHIT UP!!!" just to let you know that this will be unpredictable business from start to finish. Spooky, inventive, and contains the only recorded instance of someone plausibly rhyming the word "style" with "cloud." Therefore: completely essential.