This week's Patron Saint of Spicy Livin': For the 4th, there is but one choice: 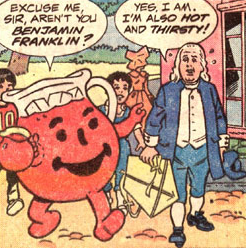 Friend of the Kool-Aid man, Founding Father, poon hound extraordinaire, the man behind the quote "Beer is proof that God loves us and wants us to be happy," inventor, daredevil, exhibitionist, member of the Hellfire club, productive drunk, thinker, hellion, and above all, total quote machine:

Beware of the young doctor and the old barber.

I am in the prime of senility.

And lastly, his finest work: on why you should get with old ladies:

...because in every Animal that walks upright, the Deficiency of the Fluids that fill the Muscles appears first in the highest Part: The Face first grows lank and wrinkled; then the Neck; then the Breast and Arms; the lower Parts continuing to the last as plump as ever: So that covering all above with a Basket, and regarding2 only what is below the Girdle, it is impossible of two Women to know an old from a young one. And as in the dark all Cats are grey, the Pleasure of corporal Enjoyment with an old Woman is at least equal, and frequently superior, every Knack being by Practice capable of Improvement...

...8thly and Lastly They are so grateful!!

Ben, tip of the tricorne to you, sir.

Holly is out of pocket, so this is a solo production. Extra profanity added to beef the thing up.

Drink: Applejack. So impure its colonial nickname was "essence of lockjaw." You're aroused, yes? Of course you are, Dangersouse. That's why you'll snag a bottle and mess around with it even with the risk of blindness being a real possibility (and if you're snagging some of America's bathtub brew answer to raki, that is probable.) Modern equivalents of applejack won't blind you, but the taste is an unmistakable apple-ish, burly raw redneck of a taste, something you imagine would go well with a dinner of smoked bear meat after you lost your eye in a fight over a hussy's spoiled honor.

There are a few variations on applejack cocktails, but The Marconi Wireless is the most stylish cocktail. In addition to having a badass name, it is both simple and derived from the Waldorf-Astoria's Drink Guide. The particulars:

On ice, down the hatch, and suddenly you've been hit in the face with Jersey Lightning, the same brew used to pay construction workers in colonial times.

Comestible. FRIED GODDAMN CHICKEN. So good all-caps blasphemy has to be used. Put it against the American flag, and the dead in Arlington Cemetery make an audible rustling noise as they all salute in unison. Ten hut! 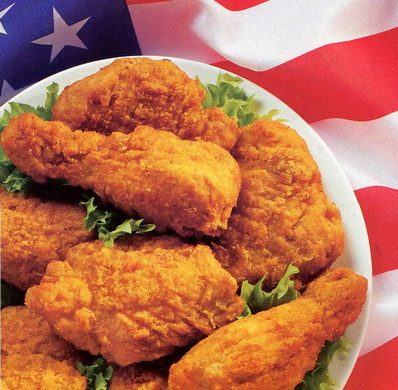 Eat it with a fork and I will use mine for the only possible purpose a fork can serve around fried chicken: staking your hand to the table and taking yours from you, because you don't deserve it. I ask you: would you have sex with someone using tongs? Yes, you would, probably, but you're not normal, and neither is your tong-ee. Carry on.

To the remainder of those normal people who prefer the hands-on approach, just eat that shit with your hands the way Satan intended, or don't eat it. Snobbery can't really be applied to something so affiliated with the black and white trash communities of our fine nation; get it at Popeye's, eat it out of the bucket from KFC, pay 18 bucks for it at Watershed in Decatur, or go to the AU and get it at the Busy Bee. It's all varying degrees of stunned excellence, though you are allowed to have your preferences.

The sensual pleasures are limitless. There's a vein of meat just below main layer of the breast so delicious chickens would eat it. Nay: chickens should eat it, and other chickens would forgive them for it. If there is a part of a person this delicious, I will be the first in line to eat it with bare hands and a wetnap waiting.

There's more: nubbins of batter, just fat, salt, black pepper, and pure chicken essence bound together in little asteroids of pure ecstasy, the marrow, sucked straight from the bones, the silky connective tissue that--if you're a pure cave person--adds another layer of pleasure when you suck it straight off the bone.

Feel no shame when you scrape the box for the last scuds of batter sitting in the bottom of the box. That's happiness, pure sweet happiness that will kill you just as quickly as any other really good thing in life. Dig in without regret. In summary: fried chicken is fucking awesome, and if you don't like it I will beat the shit out of you until you buy me some, you un-American shitbaggins.

Combustible. Evil Knievel Attempts to Jump The Caesar's Palace Fountains. Qualifies as a combustible due to the small explosions you can hear in his bones as they break, and from the flaming excellence in the story behind the jump itself:

On the morning of the jump, Knievel stopped in the casino and placed his last 100 dollars on the blackjack table (which he lost), stopped by the bar and had a shot of Wild Turkey and then headed outside where he was joined by several members of the Caesars staff, as well as two showgirls.

A feat combining attempted insurance fraud, hornswaggling network coverage out of the deal with a fake corporation, broken bones, a motorcycle, gambling away your last 100 dollars, and a guy in an American flag suit? APPROVE.

Want became "need" when I saw the painted tires for the first time. 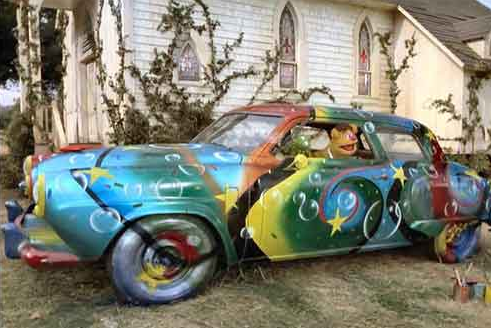 Sexy redneck idiots seducing responsible but vulnerable women into disappointed lives, trailers, beer in cans, people who've done time, ranch houses and anonymous streets, the occasional bounty hunter, the quotidian surreal, oddball accents, theft, a populace bristling with weaponry, folding lawn chairs, the shameless nouveau-riche, swingers, and the beautiful importance of it all: Raising Arizona, you are my America, and far closer to documentary than fantasy than most people would like to admit.