AND NOW, NICE WORDS ABOUT A COACH

Share All sharing options for: AND NOW, NICE WORDS ABOUT A COACH

Quiet miracle noted: Northwestern coach Pat Fitzgerald had his contract extended through 2015 today. Fitzgerald took over the program after the sudden death of Randy Walker in 2006, endured a 4-8 first season on the job, and learned on the job in painful fashion in a manner that at a larger program would have had him on the grill and sauteed in the unsavory butter of public scrutiny. 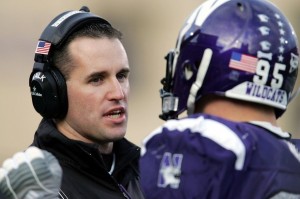 Following a 6-6 season in 2007, the Wildcats finished 9-4 on the season, made the Alamo Bowl, and could do just as well this season in a murky Big Ten full of teams either building (Minnesota, Michigan State) stuck in transition (Purdue,) or [UNKNOWN QUANTITY] (Indiana, Illinois, Wisconsin.] At the very least, they'll be competitive and zip out through an early schedule full of Towson, Eastern Michigan, Syracuse, and Miami (OH), and make another bowl game. If you called this three years ago, you're a more optimistic punter than we are. Not that we're sad to see it: not only does Fitzgerald produce robust children at a brisk pace and want you to know this, but he's producing a steady product conceived under the most difficult circumstances in Evanston.

ONE HUNDRED COCKTAILS TO YOU, Pat Fitzgerald. If a blogger can't say anything bad about you, it can't be done.