Our patron saint of Spicy Living this week is Klaus Kinski. Slightly schizophrenic according to medical records, prone to great rages, an inveterate womanizer of immense appetite and zero shame, and a brilliant actor prone to getting into fistfights with his directors who demanded payment not in checks, but in "Clean, new dollars, because old money smells like shit." Accept as evidence the following: 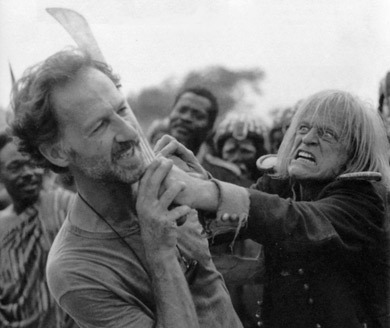 We first meet Kinski on one of his theatrical tours, right before the filming of Aguire. The year was 1970, and audiences throughout West Germany were packing houses to see Klaus Kinski in blue jeans and stringy blonde hair give "Jesus speeches." These speeches mainly consisted of long and articulate rants about pestilence and animal waste.

"One should judge a man mainly from his depravities. Virtues can be faked. Depravities are real."

Klaus Kinski, for being so spicy his co-stars offered to kill him for the director, makes our list of Spicy Livin' patron saints this week, and ascends to a special tier for having so many inspired tantrum videos of him totally freaking the fuck out that we couldn't choose just one. Prost, you madman, you.

Holly: Bourbon and ginger. It's summer, and that means slowing your brown liquor roll to stave off starting any barfights until the sun goes down and you can brawl without getting your scalp sunburnt. To that end, if I'm running low on supplies and high on BAC I cut this with a little (just a little! We're not on sorority row anymore, campers!) of this and go on my stabby way. (Until it's dark out, then watch your ass.)

Rose is hot weather wine, and it comes from a quick dip in the tank with the skins and then a tank fermentation without them, resulting in a light, slightly fruity and tart wine you can drink on the surface of the sun (or in Columbia, South Carolina in a windowless van with shag carpeting in July, which we know some of our readers are wont to do.) You also get to have this fun conversation with your friends when you drink it at a barbecue:

When this happens, just remember that you can drink a boatload of the stuff without a serious hangover, it matches just about anything summery on the menu this summer, and it's usually tres cheap. And gay. Fine, it's gay. IT'S GAY AND DELICIOUS. Like a Queen album or using Lush products with open enthusiasm, you can take it from my cold dead hands, which are bent at a slight angle from our wrists.

Orson: Sweetbreads. I'm not a complete and loyal gut-meat enthusiast. When you put tripe into the steaming broth of pho, guess what? It still tastes like tripe, but now it's in the middle of my otherwise delicious Vietnamese productivity gruel. (The thin slices of ligament, though, are choice: they add a silkiness to the broth that even non part-lovers have to admit is delicious.)

Sweetbreads, however, should enjoy their own kind of special categorical exemption for anyone so squeamish about meat that they like to think it comes in whole slices pre-wrapped. The sweetbread is the thymus gland of a cow located in the neck, meaning not only are you eating something that's not only organ meat, but could conceivably be ripped directly from the throat of the cow if you were properly possessed by the spirit of demonic carnivorous hunger. (KALI-MAAAAAH!!!)

Surprisingly, it's one of the most succulent, tender meats you'll ever destroy on a plate, and if you get a chance to once in your miserable, short, and brutish life, go to Babbo in New York and get theirs. They take the heart section of the sweetbread, roll it in some kind of magical fennel batter, fry it for a bit, then serve it with a glaze of balsamic vinegar presumably aged by putting it in bottles, and then storing it beneath the flawless and protuberant buttocks of a hundred sleeping naked Italian virgins. They top it with an afro wig of flash-fried orange zest cut into tiny ribbons, and OH FUCK IS THAT BACON ON THE BOTTOM. (It was.)

I was drunk out of my mind at that point, and probably rubbing the remainder of the dish behind my ears in the middle of the restaurant, but no amount of Primitivo can erase the splendor of this dish. 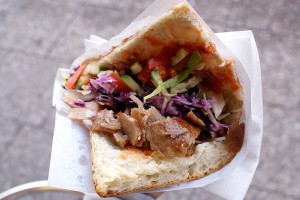 Specifically, street food doner kebab, the kind you find families of Turkish immigrants selling from open-air market stands in Berlin, in sandwich form with pita and tomatoes and lettuce and onions and tzatziki and [falls over dead]. High in vegetable content, yet deliriously tasty owing to presence of delicious baby sheep meat. (Yes, lambs are adorable. ON SANDWICHES.) This just means you can eat more of them before suffering any lasting arterial damage.

Holly: Tsar Bomba. Detonated by the USSR over Novaya Zemlya in October 1961, yielding 50 megatons, the largest explosion ever conducted by mankind. The fireball was five miles wide; the mushroom cloud was 40 miles high; and the shock wave was measurable even on its third circumnavigation of the earth. Game over.

Orson: Let the man explain, and wait for the shockwave:

Orson: Continuing my streak of "automobiles that are seconds from destruction, death, or calamity at any second:" the 1972 Bond Bug. 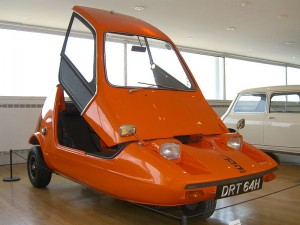 It has three wheels. Holly thinks I'm joking, and that it's really an electric shaver on wheels. You have to enter it like one enters an airplane, and in its initial production run it was only offered in one color, the ever-subtle tangerine orange. It cost more than the actual semi-logical Mini, and only ran for a short spell in the early 70s until some British car executive got out of AA, got back to his gin-bottle filled office, and then realized he'd approved an unprofitable hell-tricycle of a car for four years in his drunken stupor.

It is, of course, a cult favorite complete with its own site and animated flash video game. I'll have one by next week.

Holly: This is the concept floor plan for the private-jet version of the 787 that has a "cinema lounge" in it: 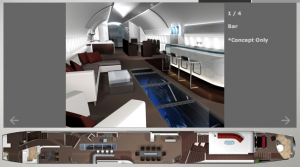 You'll also note that the bar area has a plexiglass floor through which you can view whatever it is you've got in the cargo bay -- your collection of mink coats, your Bentley Flying Spur, dozen trained Burmese pythons, what have you.

Holly: Out of Sight. Stockholm Syndrome was never so romantically plausible. This caper flick came out eleven years ago and remains one of the sexiest pieces of celluloid ever to leave the viewing audience wanting a cigarette and a cold shower. You know the cast: Clooney, J-Lo (who can ACT in this thing. Like, ACT ACT. We're as shocked as you are), Dennis Farina, Luis Guzman, Isaiah Washington, Catherine Keener, Ving Rhames, Don Cheadle, and Steve Zahn in a role that curiously does not make you want to throttle him. It's Soderbergh at his stylistic shot-in-the-dark peak, never equaled by him before or since. (Although he's tapped for the Moneyball movie in 2011, but that seems considerably less likely to involve heavy petting in a car trunk.)

Orson: Let us salute the neglected and possibly dying art form of the music video for a moment by saluting Chris Milk. You may recognize his work from the video for "All Falls Down," where Kanye West spends a futile 4:19 chasing Stacey Dash through an airport. 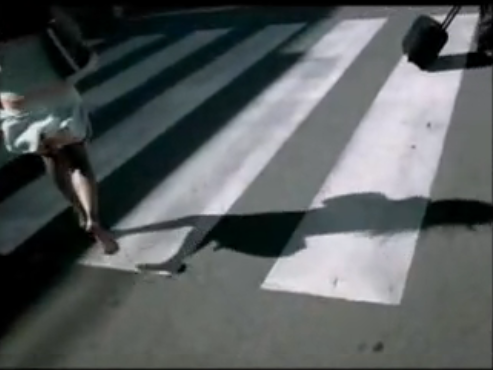 You're not catching that plane. Ever.

West gets his fresh white tee soiled by a kid with a tube of Mustard, washes the shirt out in a bathroom, chases Dash for a bit more, raps this way through a metal detector (where you can see the metal plates in his jaw,) and gets blocked from following Dash on board by a security guard played by Common. It's an obvious metaphor for the song's material--chasing an illusory and unattainable happiness through wealth--but it's all so playfully done you don't really care. Also, Stacey Dash--who is forty plus, mind you--is in it running and bouncing a lot in a lovely enough way to make me suspicious of my own critical instincts here.

Fortunately, Milk is plenty good all on his own without Ms. Illegally Hot and Improbably Over 40. He also directed a bunch of Nike commercials, and had Cee-Lo singing as an animated heart walking around a diner counter laying down in people's lunch plates. Singing animated hearts and Gnarls Barkley collaborations are enough to make me suspect mad genius and salute in its general direction.