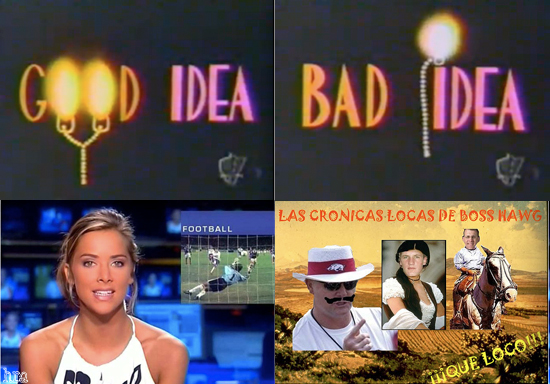 Good idea: Having an affair with a lady reporter. Not a bad idea, especially if the reporter is Melissa Theriau.

Bad idea: Having torrid affair with a lady reporter, getting caught, and having your telephone records subpoenaed by a slavishly devoted fanbase then being run out of town.Not that this ever really happened to anyone ever...

Good idea: Going for two late to win. Especially on the road, or in a bowl game where you may as well live big and die big:

It's also good if you can convert them from 33 yards out if you have to, too.

Bad idea: Going for two early as a suprise!

We have no real statistical evidence for this being a bad idea other than to say this: it was a key part of the early [NAME REDACTED] playbook, and a favorite Gotcha! move from Dennis Franchione in big games. It's not that going for a two point conversion doesn't make sense in some contexts, but generally speaking the same kind of coach who reaches for the two-pointer early is also the kind of coach who shaves away at the games's cheap corners to make up for a lack of fundamentally successful philosophies. Also, nothing deflates the momentum of a successful scoring drive than a flubbed two-point attempt, or makes you look more like you have next to no clue what you're doing.

Good idea: Hiring a coach who at least has "head coaching experience" on his resume. It gives you the plausible denial of an experiment gone wrong. Take the case of Tom Jurich, the AD at Louisville who hired Steve Kragthorpe, he of his own verb ("To Kragthorpe," or inexplicably blow college football games in the early 21st century.") No matter what happens with his hire, Jurich has two defenses. First, he can legitimately claim "I hired an experienced and successful candidate, and it didn't work out." All true, since Kragthorpe was successful at Tulsa, and was lauded as a solid pick coming into the job. Second, he's got a huge amount of spiky paperwork guaranteeing his pay and more from Louisville...even if Kragthorpe flubs again and gets the axe late in 2009.

Bad idea: Hiring a coach for your heavily scrutinized major football program with no head coaching experience. Rarely a good idea, and a really deplorable one if it involves hiring an assistant from outside the program. The SEC is a bit of an anomaly in that two quite successful examples of this come to mind: Mark Richt and Phil Fulmer, one internally hired after stabbing Johnny Majors in the back with his own whiskey bottle, and another hired off Florida's State's staff.

Bad idea:The Desperation Trick Play. The trick play in a time of need. Another full-on sign that the people pulling the strings have little but poorly calculated bluff. Not to continue a pattern, but pattern continued at the 5:16 mark of the video below.

Taking the ball out of your best offensive player's hands--or worse still, making them do something they typically don't do in a time of crisis--in a desperate wager to win a game. Rephrased: so, dealer. This is nineteen, right? And you've got a five showing? HIT ME BABY!!!