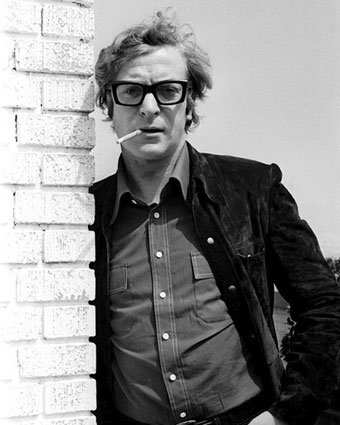 Your patron saint of spicy living this week: Michael Caine, who when asked about starring in the abominable Jaws: The Revenge said: "I have never seen the film, but by all accounts it was terrible. However I have seen the house that it built, and it is terrific." He also slept with Bianca Jagger in her prime, made Albert the Butler into a former Burmese guerilla-killing badass in Christopher Nolan's Batman movies, said the best "bloody whore" in all of cinema in Get Carter,, and uttered the line "She's in fine condition" while groping a young lovely in Alfie, and will beat your ass in a staring contest. Cheers, sir. To the living spicy-style...

Holly: The Dark and Stormy. It's summertime, and that means hurricane season for your poor livers. Batten down your hatches with this sweet-but-deadly combination of dark rum, ginger beer, and lime over ice. Make it with black Gosling rum or not at all. (And that's ginger beer, not ginger ale. What are we, savages?)

Orson: The Rusty Nail.I know. It’s high blasphemy to actually tell scotch fans what you’re actually tasting when they pour you a tumbler full of something expensive that still tastes like fried badger assholes.

"Mmm, can’t you taste the peat? And the hints of caramel?"

"No. All I taste is the reek of stagnant ditchwater and a hint of cheap bubblegum, actually."

"Oh, come on. You have to let the flavors soak in."

Along with not liking jazz and Woody Allen films, my complete inability to taste anything other than moldy cooked animal rectum when drinking scotch is one of the three things keeping me from being a really hip 58 year old man in 1980. I cry myself to sleep over it nightly or never. I forget which one.

Like Joseph Heller and Catch-22, sometimes you get lucky and catch lightning in a bottle-or in this case, in a sturdy tumbler with perfectly globe-shaped ice cubes. The Rusty Nail involves Scotch, which I hate, and Drambuie, a scotch-based liqueur that judging from its flavor was brewed as a pranky that no one got. It even has lemon, a flavor in my universe customarily referred to as "lime’s bitch."

I hate all three, and yet…mix them in the same glass in a 1.5 oz/0.5 oz/twist ratio, and you’re quaffing the nectar of angry and awesome gods. This is why I only passed chemistry by turning in homework, because I have no idea how it happens, but I don’t care and don’t want to know.

Rusty Nails, when consumed slowly, will make you feel three steps from walking onto the Mad Men set, spanking a random secretary’s ass, and winning the big Magnavox account with an emotional and entirely improvised pitch involving a picture of Donna Reed, your penis, and an allusion to the Odyssey. Drink them. Often.

Orson: Orson: Masala Dosa. Oh, Masala Dosa, I feel more than confident you are the tastiest food shaped like an anti-tank rocket on the planet. 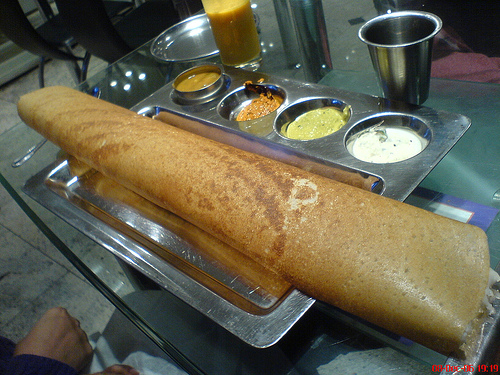 When they’re done right they look like insurmountable piles of calories wrought into the shape of a pipebomb, and can in variation come filled with the Indian goo/food of your choice: potatoes, lentils, coconut, vegetables, meat curries, whatever. You’ll be hungry an hour later, but that’s fine: reapply rocket launcher to mouth until you achieve desired results.

I can eat three of these without blinking and then immediately launch myself into a colorful dance number where I get dangerously close to kissing my wife, but then instead rub my nose to hers, wink, and fall into perfect sync with my backup dancers while wearing a Members’ Only jacket and jeans pulled up to my navel.

Holly: The other day, thanks to the vagaries of Twitter, I became acquainted with a marketing rep for Revved Up Dip. If you can't sit through the flash intro screen long enough to find out for yourself, Revved Up Dip appears to be...caffeinated smokeless tobacco. Let us be perfectly clear: I do not recommend this product. I am having a hard time thinking of anything more vile to ingest. But I'm also betting one of you lot is willing to give this stuff a whirl, so let us know how that goes.

Orson: Holy crapazoid: The explosive power of a 1990 Ford airbag:

The inspirational power of Steve Winwood’s "When You See a Chance" only heightens the grandeur of it.

Orson: Wingsuit. Because if I'm going to shatter any more bones in my back, I want it to happen all at once without a shred of hope for survival: 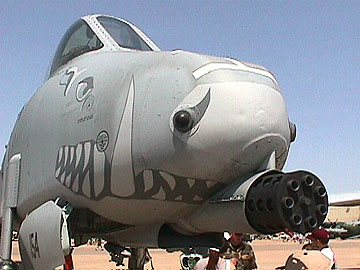 Basically, the A-10 is a Gatling cannon that just happens to have an airplane built around it. The GAU-8 fires depleted-uranium rounds the size of Coke bottles at a rate of 65 rounds per second, and the recoil is such that it actually slows the plane down in flight. But that doesn't matter, since the point of the A-10 is not to go fast, it's just to sort of lope along and then dive-bomb tanks on the battlefield. It is the ugliest, baddest-assest airplane the Army has, and if you have one of these you will never need to worry about anyone taking your parking space, because stuff like this tends to happen.

Holly: Sunshine. You know Danny Boyle? Long before your girlfriend dragged you to see Slumdog Millionaire, Boyle was making movies like Trainspotting and 28 Days Later, and right before he ran off to India he made this little gem of a movie. It's a bleak, gorgeous scifi meditation that turns into an action flick about halfway through, and it won a whole mess of British film awards before being completely shut out of the Oscars, which is why you've never heard of it. Let's fix that, shall we?

Canon. Video games can go here, right? Because the Orange Box might be the most addictive and durable video game ever, as well as the most bang for buck per pixel of any video game ever published. I haven’t even touched what was allegedly the main attraction on the disc--Half-Lifes 1 and 2-- and am instead just playing Portal and Team Fortress 2 over and over again.

Just taste the pride of the sniper at work, and feel the pain and strain the job puts on his family life:

Portal is one of those video games you can actually recommend to non-gamers because of the mind-blowingly simple but maddening gameplay, while Team Fortress 2 is just one loving variation after another of ways to blow other poor souls to pieces. If you don’t fall in love with a game where the Demoman speaks with a Scottish brogue and clubs people to death with a bottle of whisky, I don’t even know who you are anymore.

Besides the multiple installments of the NCAA Football series, this remains the only game where I can safely say I’ve gotten more than my money’s worth out of it. That’s a good thing, especially because I paid for the game by keeping it too long from Hollywood Video and never returning it.