Reader Ian points out a frightening similarity between the Tamil Tigers logo and LSU's own branding, as well as offering up his own hybrid of the two: 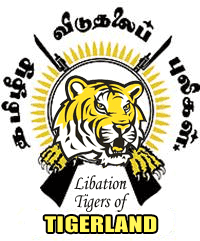 Please not the "Libation" slipped in there for effect. As he points out:

LSU has two up on them: The Tamil Tigers are a big 0-1 on the year, and still have their prized starting quarterback. Both do share a love of spicy food, though Cajun and creole cooking have nothing on Sri Lankan food, a cuisine so heinously spicy it contributes to higher rates of stomach cancer in the country. (It also makes determining whether you have the shits very difficult, so ass-scorching are the resulting bowel movements. They could be normal, or they could be shigella, as friends of ours who lived there found out the hard way.)