Cautionary tale of getting in barfights, vol. 382394: You never know when you'll find yourself in a robot bar fight, and if you don't think that's a bad scene, just look: 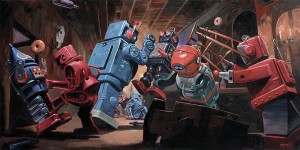 Cautionary tale of getting in barfights, vol. 382395: You attempt to hit on women in a bar. You believe you're saying things like, "My, ma'am, what a fine night it is, and how gilded the moonflower appears to be on this luminous, intoxicating evening." The woman, seeking some kind of shelter from you overpowering masculinity, sends over an envoy who happens to be a backup linebacker for the Illinois Illini football team.

You have instead said nothing like what witnesses have overheard, a garbled phrase closer to "They call me the Sheriff of Pussy County, and you're under arrest!" than anything you thought you were saying. You could call off things right here, but alcohol has disabled the restrictor plate of logic, and 6'6", 310 pounds looks the same as a Girl Scout after enough turns of Kam's Shot Wheel. You take a confident swing at a much larger man. Then, this happens:

The only possible advantage to things working out this way? You being unconscious during the malicious hangover afterwards--not a fair trade for massive head injuries, but still a trade. Garrity is suspended until all the cases of the case come out, but his two counts of felony aggravated battery do qualify him for six points in the Fulmer Cup and a bonus point for punching someone so hard their skull broke, bringing the total points awarded to seven points in the Fulmer Cup.