Handguns don't kill people. Mike Patrick does, and when he's through he stuffs them in a vat of quicklime he keeps beneath his prize roses. Louisiana legislator Ernest Wooton has proposed a bill that concealed weapons (with a proper permit) be allowed on the LSU campus. 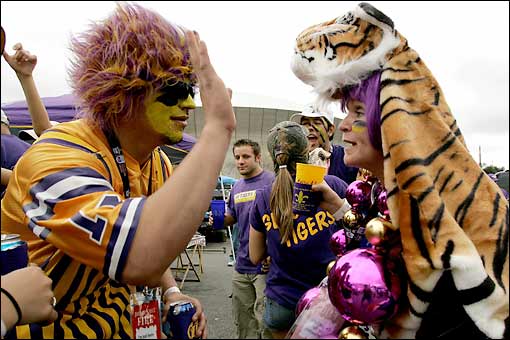 This woman was shot for her pelt sometime during the third quarter.

If you've been to Baton Rouge on a gameday, this seems like as good an idea as giving high schoolers an extra set of genitals, something Les Miles agrees with in the general sense.*

Coach Miles, in his own words:

"Having worked on a college campus for most of my career, I know that firearms do not belong on campus.

"To allow firearms on campus would be to introduce an element of risk that could compromise all that is good about a university setting."

Imagine the Mogadishu-on-the-Mississippi resulting from a Tigers loss, and you get the picture. As much as you might have joked about seeing Lee Corso shot after a game, do you really want to see Lee Corso shot after a game? Oh, so you do want to see him shot after a game. So sorry about that. No, we're not standing in your way. Why would we do that? My, you're handsome. No, not in a gay way. Hey, you should point that somewhere else, really, Corso's right there, and BLAM OW owowoowowwowo my, that stings, and yes we would like a beer, please, thanks...**

*He might support the giving of additional genitals to high schoolers. After all, he does have eight testicles himself.

** Please note the LSU fan here offers you a beer after shooting you. They are polite in their own way.