THE THRILL OF VICTORY, SHANE, THE SENSATION OF TRAMPLING ON AN ENEMY

Share All sharing options for: THE THRILL OF VICTORY, SHANE, THE SENSATION OF TRAMPLING ON AN ENEMY

A shaded shed on the grounds of Ben Hill Griffin Stadium. Shane Matthews, former Gator quarterback and radio commentator, wakes to find himself bound to a backboard. ALBERT THE ALLIGATOR stares at him.

Matthews: I was having a beer at the Copper Monkey one second, and then...nothing. I just want--

Albert: (Raises a finger to his lips. Um, the place where his jaws come together. Whatever that is. There.)

Matthews: What do you want from me?

Meyer: Shane, I only want you to do what is required of you.

Matthews: I...I don't understand. I just pointed out that in the Ole Miss game they played man-to-man the whole game, and that we didn't take advantage of it, and--

Meyer: Shhhh...Shane. You understand the present and the past, Shane. But now...to the future.

Matthews: These are chafing my wrists. I have a show in 45 minutes, Coach. Now, I'm sorry you took offense to what I said, but they pay me to tell it like I see it. What are you doing with that bottle of water and rag, I--

Urban: I want you to understand this. The thing I have for you here is the worst thing in the world. It goes beyond fear of pain or death, it unendurable, and it varies from person to person. In your case, it is your opinion being drowned out by others. 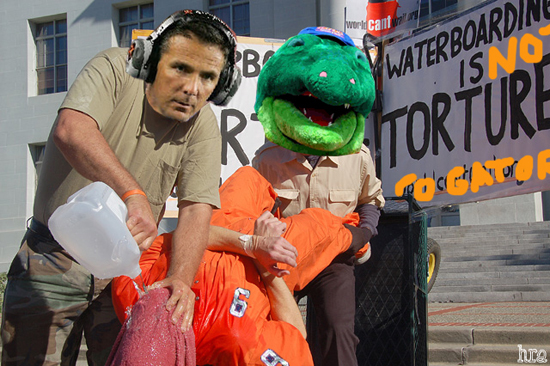 Matthews: WHY? Let me go, I'll do anything you want, just do let me drown.

Urban: It's just a taste of what awaits you in Seat 37F if you ever dare to criticize so much as a hair on my program's proverbial head.

Pours water a second time, allows Matthews to breathe after 15 seconds of the treatment.

Matthews: THIS IS TORTURE!!!

Meyer: No, it's not. It's love. I'm just trying to protect our program, Shane. Also, I prefer the term "Facially Administered Tracheal Aquamassage," Shane. And it sounds like your lungs are still a little tense, and could use some more treatment.

He pours more water. "Orange and Blue" plays faintly in the background.

(ps. This is slightly old cheese anyway, as it echoes previous statements Meyer's made regarding criticisms of the program, fits right in with his Woody Hayes-ish tetchiness, and happened last week.)