Share All sharing options for: HEART OF DARKNESS: DESTINATION AMES

This week, the Des Moines Register held a live chat, a sort of State of the State discussion. The topic: Iowa State football. Our crackerjack team of investigators has uncovered exclusive transcripts from the event. Excerpts follow. Some of it is actually taken verbatim from the chat.

Randy Peterson: I'm ready for your your questions, etc. How many games will Iowa State win? My over-under number is 6. Which, if last year tells us anything, is more than good enough for a bowl berth.

[Comment From Lance]Who are some people that could impress us both offense and defense that we have not heard of?

Randy Peterson: I heard some good things about receiver Lonzie Range while making my rounds in Ames earlier in the week. For one thing, he has two arms. What else do you need to catch a football? I mean this as an open question to you all, as I haven't seen it done in several years by an Iowa State player. 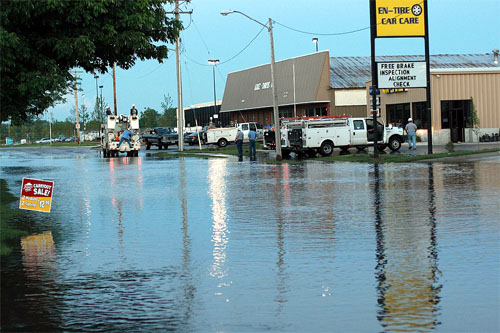 [Comment From Guest]It sounds like the Defense is going to attack and try to make plays as opposed to play bend-but-don't-break. In your opinion, will this be a good move for their defense?

Randy Peterson: Anything will be an improvement from last season. The coaching staff have maintained their "just don't break" philosophy throughout the spring, and are on schedule to start working on bending in fall camp. The reports as far as the number of players who have been able to walk off the field under their own power after plays have been really encouraging.

[Comment From ISUBILL]Which 6 teams will we beat, in your opinion?

Randy Peterson: This is just my guess...a way to stimulate fans heading into the summer...but I think the Cyclones have a chance to beat ND State, Kent State, Army, Kansas State, Baylor, Texas A&M and Colorado. Hear that, Cyclone Nation? A chance to beat North Dakota State? Is it stimulating in here, or is it just me?? [rips off shirt]

[Comment From cst8win]What about the O-Line??? We all know the foundation of a team is the big boys, and that much sucess in this area will lead to sucess as a team.

Randy Peterson: They're learning a new system, just like the skill-position guys, so patience is needed. But, with the talented quarterback(s), running backs and receivers running the spread offense, if the offensive line can just knock a defender off stride, I'm thinking considerable improvement from last season. So all we need now are some talented quarterback(s), running backs and receivers! It always makes me feel better to make a little list. I tell you, things are lookin' bright. [/staring directly into sun without blinking]

[Comment From ClonedAV]Have you heard any player position switches this spring?

[Comment From AltoonaKahuna]Okay, I'll leave the ISU-Iowa game out of it, but how about the defense? From what you've seen and what you've heard, can this D actually come up with some stops and give the offense a chance?

Randy Peterson: The aggressive-style defense being taught is what other teams have used with success, therefore, I think it will eventually work at Iowa State. It's a vast improvement over last year's Tiptoe Through The Tulips Cover 1 scheme, and should see the Cyclones' feet firmly planted on all Hawkeye throats at midseason.

[Comment From ISUser]So am I assume you think that ISU will get a road win this year? What do you think the odds are we get a conference road win?

Randy Peterson: Road wins will be so bountiful and emphatic that beginning in 2010 the Cyclones will play no home games. Jack Trice Stadium will be converted into an outdoor field laboratory for the biology department.

[Comment From cst8win]How many wins do you think will satisfy Cyclone fans this year? I think 5 or 6 would be a sucessful season, and one step up.

Randy Peterson: I'm not opposed to reporting on a bowl game. (There, I said it. Bowl! I'm as giddy as a schoolboy!)

[Comment From Guest] How do the young CB's look? They are the key to a blitzing defense because if they can't hold up, it'll be a long year defensively.

Randy Peterson: Not just any bowl, mind. This team won't be getting out of bed for a trip to Shreveport or Mobile. No, we're aiming for sun, sand, and loose women.

[Comment From Bruce]Who won't we see at the spring practice game on Sat. - be it due to injury, or just not on campus yet - that's potentially a 1st or 2nd stringer by the time the season starts?

Randy Peterson: Of course, prestige is also a question. Who cares about the number of strip clubs per capita if all you've got to show for it at the end of the week is a ticket stub from the St. Petersburg Bowl? If Iowa is good enough for the Outback Bowl, they oughta be thrilled to host the likes of the Cyclones, am I right? High five! [slaps palm to computer screen]

[Comment From Guest]How do you feel the RB position will play out? Will Robinson get the majority of the carries?

Randy Peterson: My one exception would have to be the Las Vegas Bowl. Nothing like a little coin slot play to liven up a long cold winter in Middle America! Guys, you feelin' me? Guys?

[Comment From Nate Booth]How is the communication style different between coaches and players this year?

Randy Peterson: No. You know what? Fuck that. My feet are on the ground, folks, but I'm about to reach for the stars. I'm calling it. Iowa State to the title game. ROSE BOWL BOUND, BABY!! WHO'S WITH ME?? THE SKIES SHALL RAIN BLOOD AND ALL THE WORLD SHALL QUAKE IN THE SHADOW OF THE CARDINAL AND GOLD. NO, THE OTHER CARDINAL AND GOLD. I CAN'T FEEL MY FACE -- [runs around in circles, passes out]