FULMER CUPDATE: MADNESS IN ALL DIRECTIONS

Share All sharing options for: FULMER CUPDATE: MADNESS IN ALL DIRECTIONS 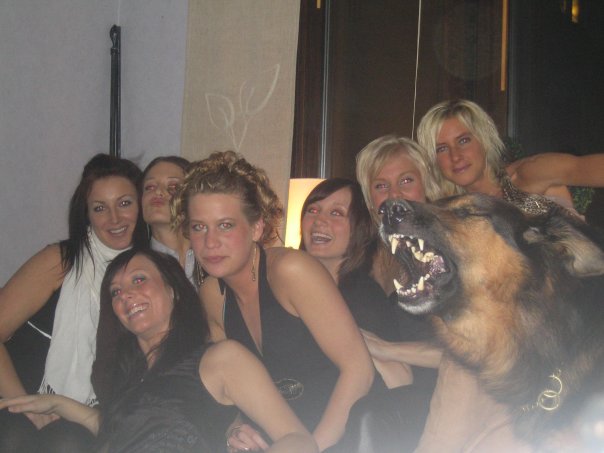 This picture and Party Dog have nothing to do with the Fulmer Cup. Please move on.

It's a busy week in the Fulmer Cup. Vamonos!

Blaine Dalton and how to have a misunderstanding involving beer and hydrocodone. For the moment, Blaine Dalton, Mizzou's freshman qb of high pedigree and hoopla, has scored a conservatively estimated five points for the Tigers for "suspicion of felony possession of a controlled substance, minor in possession of alcohol, possession of false identification and three traffic charges, including a lane violation and failure to provide insurance."

We'll back off the tiny traffic charges for the moment and hold fire as Dalton's charges may likely be the work of overactive campus police imaginations.

From the Columbia Daily Tribune via Bully for Old Mizzou:

"They looked in my car and found an unopened beer in the glove compartment," Dalton said. "It was warm. I don’t know how long it had been in there. It wasn’t cold and it wasn’t open, and I wasn’t drunk or anything like that."

Dalton said a police officer then brought the prescription bottle to Dalton and asked him, "Who’s Wilson?"

Wilson is Dalton’s former Blue Springs South teammate Zach Wilson, an offensive lineman who started three years with the Jaguars and then went to Northwest Missouri State University on a football scholarship before giving up the sport last season.

Wilson’s name was on the prescription bottle. The pills were prescribed by a doctor after Wilson had shoulder surgery last September.

Wilson said he left them in Dalton’s car after visiting his friend before a Missouri spring scrimmage.

"They’re mine," Wilson said late Saturday night. "I don’t remember the exact date I went to MU to see Blaine, but I had on some shorts with no pockets and I threw the pills in his glove compartment.

Real friends always leave extra pills for you. Alibi or not, Mizzou gets the five for the moment.

Ohio State will now use their mandatory three points for the season. Ohio State maintains a constant low-level presence in the cup. We hesitate to call them a steady performer, but they usually show up for somewhere around three or four points, and usually for something completely innocuous like smoking weed in a dorm room or perhaps the random barfight or two, or perhaps a random DUI by a walk-on running back.
Two points for the Buckeyes are awarded, since it is a normal, run-of-the-mill DUI with a drunk but not spectacular BAC reported.

Aggie DUI Double Dazzles Defenders! Defense attorneys, we mean. Offensive linemen Matt Allen and wide receiver Terrence McCoy each picked up a DUI, which we'll bundle as a package deal and award five points for in total (two points for each charge, and one bonus for accumulating them like twinsies.)

The "Mobile Vegetable Supply" sign made the police suspicious. We mentioned last week that Marshall had been quiet thus far, thus prompting concerned citizens and Marshall football players to do something about all that lack of trouble by getting arrested for felony drug charges.

According to Cabell County Sheriff Tom McComas, his deputies were patrolling for underage drinking when they spotted a car double parked. Bembry and Marshall were in the car. When they rolled down the window to speak with deputies, McComas says there was a strong smell of marijuana. Deputies then searched the car and found four individually wrapped bags of the drug.

The Thundering Herd stomps up seven points in all--three for each felony charge, and a bonus for doing this immediately after we said how nice and quiet things were in Huntington this Fulmer Cup season. Both are suspended from the team, absences putting a substantial dent in the team's depth chart: Darius Marshall was a 1,000 yard rusher and the team's leader in yardage on the ground last year, and DeQuan Bembry was the leader in tackles for loss. Marshall now sits at ten points total after three points from Bembry's prior arrest in March, and puts the Herd in a very bad spot, indeed.

He's a good boy. But Cameron Wade neglected to appear in court, and earns FSU one point in the Fulmer Cup.

Note: There are a number of other scores in the SAS Processing Station, but we think we may have scored them and assessed points already. We'll check on it, but in the meantime we'll let them stay under the heat lamps a bit longer.