A NOTE FROM A FORMER LIFE

Share All sharing options for: A NOTE FROM A FORMER LIFE

Once upon a time, I was the world's worst social worker, or at least felt like I was the world's worst social worker. I knew for a fact this wasn't true: in fact, I knew many others who were demonstrably worse, or spent their days wandering around the office setting the copier on fire, walking around on fire themselves, or driving company vans full of newly arrived refugees into poles and thus setting them on fire.

It was a good time in my life in some senses. I learned the exact length and degree of my own emotional crippledom, since working with refugees tests your ability to manage your emotions in a semi-healthy fashion. I'm somewhere between your average English person and a Swede in that sense: steady in crisis, but only because none of it really registers until the breakdown hits, and you burn down your house and run to the pub. I learned that if you want something done and done forcefully, you point an African woman at it, get behind her, and enjoy the crunching noise things in her way make as she runs roughshod over them. I learned that I was too hopelessly scattered and annoyed by people to ever succeed in the job I did, as I always lost the paperwork, and often found myself holding back screams in my throat when discussion of any topic went past the fifteen minute mark.

(This is not an exaggeration: I would go in the bathroom and scream into shirt out of sheer frustration in the middle of meetings. I'm sure someone heard this and assumed I was having some kind of intestinal Ragnarok in the bathroom. Apologies, random whomever--you didn't have to hear that.)

I did manage not to screw up the program I ran too badly, an accomplishment of sorts in the non-profit world. I managed not to get fired, though not without management noting that I was "spending a lot of time doing something else." (You're looking at it.) I also inadvertently started the whole series of events leading to this: 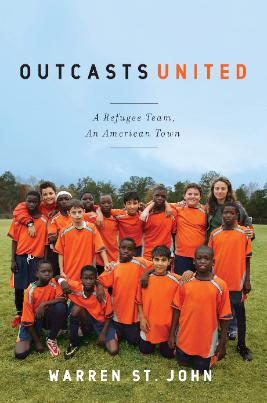 Warren wrote the article, then the book, and now it's two and a half years later and there's three hundred-odd pages on my desk full of Clarkston, Georgia, refugees, and a community I dipped in and out of over a three and a half year span of my adult life.

It must be good: I read it in a hammock on Cayman Brac, and I kept swearing I was late for a meeting with someone, or had forgotten to fax a report to the state, or that I was somehow failing someone in some way at that moment by not being good enough at my job--a job I hadn't shown up for in over a year and a half at that point, and would never show up for again.

Paying a compliment to a book by saying "It induced a PTSD-like state in me when I read it" is for me the highest kind of praise, though it really shouldn't have that effect on you. It's a prime indicator that Warren got it right when the story could have gone wrong in so many ways: too mawkish, too cold, too one-sided, too soft. In the end, it's ambiguous, complex, and very faithful to what I saw in the refugee community here, and with Luma herself, who's neither the saint she could have been portrayed as nor the relentless drill sergeant she could have been, either. As with everyone else, she's given the full chiarscuro effect, and fairly so.

It's great. You'll like it. Go buy it. I'd always wondered when that particular chapter of my life would end with a definite piece of punctuation, a moment when you could stand at point B and say, "There is point A, and it is most definitely not point B, where I currently am standing." This rarely ever happens, which is why Clarice still hears the lambs screaming in the pen, or why you sometimes wake with a start in the night and wonder about that time in third grade when you were caught picking you nose by the entire class. Life is not big on defined narrative structure.

Every now and then, you get a coda, though. Seeing this book come out is one for me, a tangible bit of evidence that a slice of life I stumbled through won't fall into the oblivion of unrecorded history and a mass of dusty copies of I-94 cards, citizenship applications, and government files with long, strange names typed on their tabs: "Besic; Ntyangyikika; Sayee; Sau U; Mohammad." Someone who could write the story did, and wrote it well. I had some small part in helping that happen, and with that I feel like slightly less fraudulent of a person.

(Please note: slightly less fraudulent. The real people, after all, are in the book.)