Share All sharing options for: OFFICIALLY THE PISTOL-WHIPPIN'-EST FULMER CUPDATE EVER

We don't make many promises, but we'll make one right now: you will never, ever, ever see a Fulmer Cupdate on this website containing more pistol-whipping per square pixel than this one. Ever. If there is one, we'll shut down the site forever.

This is Trent Pupello three years ago when he entered the University of Florida as a well-regarded freshman tight end prospect. Golden locks, as-a if he had-a just descended from the-a snowcapped hills of Tyrolia! Glowing-a smile, as-a if his a-mama had just-a called the Trent Pupello, wishing him a-good luck at school, and a donn'a forget to washa the cracky parts of the body special hard! Ah, youth-a! 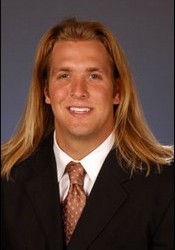 Almost reminiscent of a young Lisa Kudrow with a penis, really. Beauty incarnate, and a trouble-free type at Florida. Now, after the jump, please see what the city of Tampa does to a man. 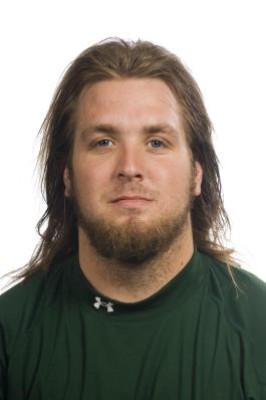 AHHHHHHH! The hair, she is so lank and frizzy! The face, she has sprouted barnacles. Clearly shooters and late nights pounding Hungry Howie's, iss not soo good for the self. Tampa will make a man angry after a while, even if you attempt to dull the pain by hanging out at the Hut Channelside, home of bikini bullriding and the most creative appetizers in Tampa Bay. ("Glass-encrusted fried calamari! Carpet-foam stuffed peppers! All by head chef Montrey Dada, the acclaimed creator of the thrice-fried lawnchair.")

Pupello was involved in a fight in the parking lot of "The Hut" on April 10th. He finished it, too.

On Apr. 10, police say, about 15 people including Pupello were involved in a fight about 2:50 a.m. in the parking lot of The Hut at Channelside.

Pupello broke away, got a handgun from his 2005 GMC Denali vehicle and ran back toward the crowd, firing in the air several times, police say.

He pistol-whipped three people, causing a bump to one, bruises and cuts to another and breaking the left orbital socket of a third person, police spokeswoman Laura McElroy said. Before he left the scene, he also tried swinging at another person but missed, McElroy said.

That's three pistol-whippings in quick order, all done so quickly it's hard to think the USF player--out for the season with a neck injury--didn't spend his rehab time watching Good Fellas for technique tips and practicing his pistolwhip form. Shooting in the air is really just extra vittles here, and further proof that when dealing with Tampans, it's best to skip the pleasantries and get right down to their preferred book of etiquette, the"Baghdad Guide to Etiquette and Traffic Safety."

Pupello faces five felony charges for this outrageous display of primate aggression. In addition, we're throwing on two points for PISTOL WHIPPING THREE PEOPLE IN FRONT OF A CROWD OF TERRIFIED WITNESSES, and for pistol-whipping someone in the first place. (You never hear of other weapon-specific misuse crimes like "sword-shooting," "club-stabbing," or "ax-poisoning." That is: not yet, since Florida does have to go to LSU this year.)

That is a total of seventeen points for USF, who is ineligible for first place right now because Pupello is the only person to incur points on the Bulls. This by rule is an Ellis T. Jones Award nominee pending future arrests for the Bulls, albeit as spectacular a single case as we've seen in a row. Remember, when someone in the 813 says they're going to their car to get their pistol, they mean it--unless they're too drunk to get back to their car at all, in which case they're going to pass out in the median and wake up in front of Mons Venus. Again.