Share All sharing options for: OBAMA GETS GATOR JERSEY SMELLING FAINTLY OF WEED 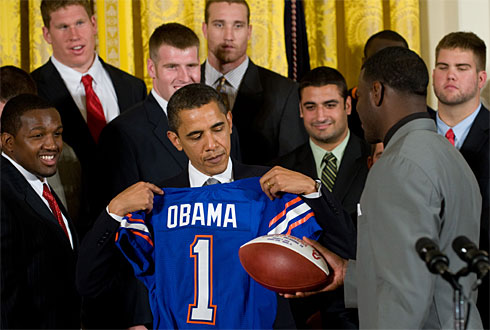 One nice thing about the Presidential visits made by college football's title holders to the White House? If memory serves us correctly, the red peppers of Konami province are among the sweetest and tastiest around. We're sorry, Iron Chef's on in the background. If memory serves us, both Presidents Bush and Obama made sure to thank the trainers and little people who make programs run, and that's always a nice fuzzy tummy rub to get from the chief executive of this badass corn-fed machine-gun sex-missile of a country we have.

He did say he'd prefer a playoff, but save your outrage for something serious, because outrage is so fucking cheap.

Splutter is so much better spent on things that matter, like on the coffee table that you stubbed your toe on this morning, or on that fucking fuck driving too slow/too fast/just existing in front of you being old/sporting a lame bumpersticker/driving a car you find contemptible when you have somewhere very important to be (like Chik-Fil-A. That's important and do not argue this)

It's emotional junk food for the subretarded regardless of political affiliation. Rage is best spent on furniture, video game controllers, and on the most important thing ever, college football. After all, the last President who knew dick about X's and O's was Dick Nixon, a man who shared a mutual admiration with Vince Lombardi, dropped strategy on Don Shula before the Super Bowl, and who ran a nice end-around on both parties by going to China.

(He also was unafraid of the long bomb in Laos and Cambodia and lost his job after losing control of players and being too aggressive in scouting the opposition. Like Switzer in bowling pants, really.)

What the President thinks about college football is irrelevant, especially since he went to Harvard. We'll start listening to the White House on college football when President Carroll wins the 2016 election on the Win Forever ticket with Will Ferrell as VP. He'll walk down Pennsylvania Avenue with a SuperSoaker full of Sex on the Beach in his skivvies. Mark our words.

(Please note that the jersey is Percy Harvin's jersey. Put it over your head and breathe for five minutes and you'll get a wicked contact high. Oh, and you can redistribute up to 19 points on the margins from Florida to Georgia in the 49-10 final of this year's game. Take it, we can afford it: even in that scheme you still come up short by a point, though we definitely prefer the free-market genius of annihilating a rival by 39 points and letting it stand that way. BRANDON SPIKES IS HERE ALL DAY IF YOU WANNA PLAY, BOY.)