I'M TYPING THIS WHILE DOING PUSHUPS FOR CHARITY

Share All sharing options for: I'M TYPING THIS WHILE DOING PUSHUPS FOR CHARITY 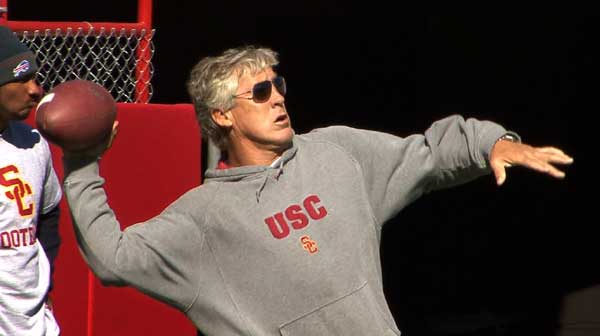 Hey, everyone. Coach Compete here. That's Pete Carroll, in case you didn't know. Of the USC Trojans. Sorry I'm late on posting, but I just did four hundred pushups for a local charity that helps crippled chihuahuas quit the gang lifestyle and have more productive lifestyles. I had to dictate a business book while doing it, so it took longer than it normally would. Excuse me.

[picks up phone] No, that's fine Barry. They're not serious. Send and envoy, double down on the anti-nuke incentives, and keep up the drone attacks on the borders. If Sy Hersh gets a hold of it, I'll kick him in the balls for you with some of my South L.A. boys, okay? Sweet. Smack Michelle on the ass for me. Yes, twice just to get all of that sweet hamhock. Laters. [/hangs up]

I've got a new kids website I'd like to tell you about. It's called CampPete.com, and it contains loads of goodies to help kids learn about football, sportsmanship, and the valuable lessons of sportsmanship. It also has a place where your six year old can upload their 40 times, hang clean numbers, and their contact information for Coach Pete to call them personally! 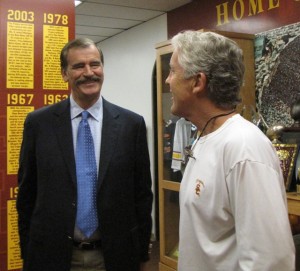 --Nada, hombre. Just wanted to thank you personally for addressing the issues of drug-related violence in Ciudad Juarez. In gratitude for you negotiating the freedom of eight Federales being held hostage by drug dealers, we have erected a statue of you in the town square pointing toward the new sunrise of peace and freedom in our city. Our gratitude is boundless.

No problem Vicente. I was on the way down there to build an orphanage for stray burros anyway. Least I could do. Now, if you'll both excuse me I have to go pull Brennan out of a snack machine. Fourth time this week he's gotten his arm stuck in it trying to get free Zingers. Never eat that stuff myself, as I live exclusively on organic greens, egg whites, and victory.