Ole Miss running back Enrique Davis and shaved bear/defensive tackle Jerrell Powe were both involved in a noise complaint that quickly escalated to the sort of mini-Pinter drama one can only find in a parking lot full of football players and hangers-on in Mississippi at 2 in the morning.

Police responded to a noise complaint at the Exchange, an apartment complex serving "Ole Miss and the Northwest Community College community." This is code for "the sort of place where, when you live there, you always check behind the wheels of your car for bottles of Mike's Hard Lemonade placed there by drunken pranksters." A Hummer was circling the parking lot and honking its horn, presumably advertising Jo-Jo's affordable Hummers through loud, post-midnight celebrations of its own massive, gas-guzzling bulk.

Someone objected to that, and when the police followed up on the complaint loud music led to Jerrell Powe's apartment. Enrique Davis--pronounced "Enrickey" by Houston Nutt--then enters the equation by making an unintelligible comment to the police officer, who then engages Davis, who then busts out the big guns:

The officer requested Davis hand over his identification, but Davis looked at the officer with a "shunning face," according to the report.

Davis then refused to give ID, ignoring the cop, who grabbed Davis's arm.

The report said the officer then requested Davis’ identification several more times and Davis started to walk towards the stairwell and gave the officer a "crazy face" when confronted about walking away. 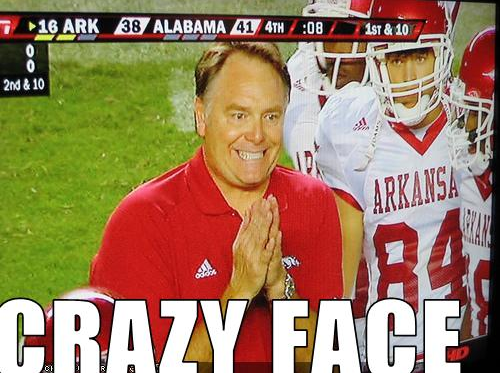 Shunface/crazyface gets you failure to comply/disorderly conduct in Oxford, a total of two points for the Rebels, but the Fulmer Cup goodies are really just side dishes for the following paragraph.

Once Officer Zachary White had placed Davis into the patrol car, he returned to address the noise violation concerning Powe. According to the report, while White wrote the citation for a noise violation, Powe said, "Zachary White, I got you. I’ll remember that."

White asked if Powe would read the bottom of the citation and sign it to ensure he would show up in court, but Powe stated he could not read and would not sign, the report said.

WIN. Ole Miss is so much more interesting now that they have a defensive tackle who can get sarcastic about his own alleged illiteracy.