Share All sharing options for: YARRRR: LEACH ON PIRATES 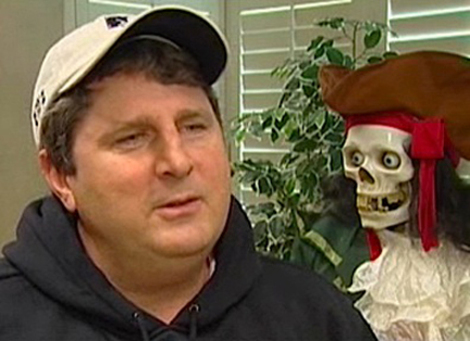 Mike Leach, famed pirate fan, may be called as an expert analyst sooner or later for a major news network. Very few people actually specialized in this kind of shit during their international affairs programs, so the only real experts are self-appointed. (And pirates, of course, but it's kind of hard to get them to hang up the AK-47 and take up a guest faculty position, even when you mention the newly refurbished faculty gym and primo parking spot.)

Leach was already talking like a policy expert in his interview about the recent rash of Somali pirate raids.

Leach was then asked, jokingly, if he would be willing to act as an intermediary during negotiations.

"I don't think they need an intermediary," he said. "They need somebody to go clean that deal out. Whoever that leader of the SEALs is, I think he's got it right. I think you ought to get the Navy SEALs out, have a long weekend...

Salient and sensible points all around: he way outperforms Lou Holtz as a pundit, though that's a bit like saying you beat Pam Ward in a yardstick-measuring contest. Wait, that would actually be quite impressive, now that you mention it.