COACH O TO TURN MOVIE INTO GREATEST FILM EVER MADE

Share All sharing options for: COACH O TO TURN MOVIE INTO GREATEST FILM EVER MADE

The Blind Side is being made into a movie. It will feature Tim McGraw and Sandra Bullock as the Tuohys, and Quinton Aaron, who you may remember as "bodyguard 2" from Law and Order, as Michael Oher. Tim McGraw's in it, so you know it's total shit gonna be awesome.

Speaking of which, a while back a buddy and I had wondered about who Hollywood would get to play Orgeron in the movie about Ole Miss offensive lineman Michael Oher. Turns out, Orgeron is going to play the role himself. Next week he's slated to go to Atlanta to do his scene with Sandra Bullock, the star of the movie.

"But I, John Lee Hancock, didn't write a love scene into the movie!!!" DASSATOOBADDIRECTAHBOAH!!! And thus prepare yourself for the most mindbending, violent, pec-flexing love scene since Team America redefined what puppet sex meant to you. What started as a 100 minute tale of love and redemption is now a 20 minute football sitcom episode with a five-hour sexcapade sandwiched in the middle. You're welcome, America. 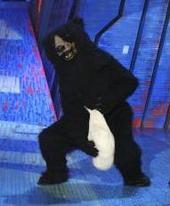 Coach O, you were supposed to wear more for this scene. It's 45 seconds of dialogue. NOTANNAHMOAH!!!

The Blind Side was probably headed for a PG-13 before this, but once you get Ed Orgeron in a room with Sandra Bullock and say the words "ACTION!", there's really no keeping it from crossing over into NC-17. Furniture will be smashed. Available foodstuffs will be used for unspeakable acts. Cajun butter will be employed. If you can imagine the Incredible Hulk in musth on a Viagra-spiked vacation to the beaches of hell, you may come close to approximating what will be captured on film that night--if the equipment doesn't melt from the very sight of so much animal lust poured into a single fragile lens. (And it will, if it's not eaten first.)