A moment of digression: Ron Howard, GET OUT OF OUR BALLER RAP VIDEO. 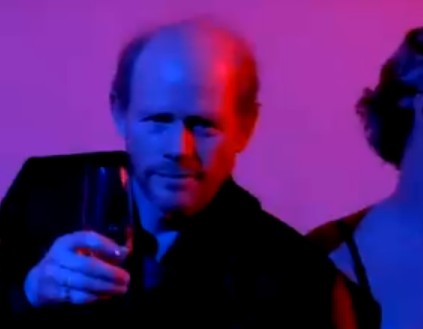 What the fuck are you doing in a car with Jake Gyllenhaal, Forrest Whittaker, and Samuel L. Jackson? Did Ironically Included White Guy #2 cancel at the last second? That's how freaked out we are by you being in a rap video: we didn't notice Jake Gyllenhaal in a rap video, or Forrest Whittaker for that matter, who hasn't been this close to hot women on film since Rage In Harlem. ("Pop goes the weasel!") It took us three listens to get over this, and to also notice this line.

This is not because she is aroused, Mr. Pain. This is because you have loaded up a 120 pound woman with enough alcohol to kill a 200 pound man, and she has released her bladder all over your white leather seats. Your pants are getting bigger not from an erection, but because you have just shat your pants while driving your Bentley down the wrong side of the street hammered off a whole bottle of Grey Goose. We suggest an expensive cleaning service.

We hope the seats in Niles Paul's car remain unsoiled and intact: extra cleaning bills would add to the already expensive fines the Cornhusker wide receiver will face after getting a DUI, MIP, and suspended license charge after his arrest around 2 a.m. Sunday morning. (He failed the Nolte rule: If drunk, pass out wherever you are, even if it's the morgue--at least they've got flat surfaces for you to sleep.) The dutiful Midwestern insistence on dotting the i's on the charges gets them four points. in the Fulmer Cup, gets Paul a suspension from the rest of spring practice, and gets you no raised glasses from Opie, who reminds you to blame it on the alcohol.