Share All sharing options for: AND NOW UNRELATED PICTURES OF SPLIT FRUIT 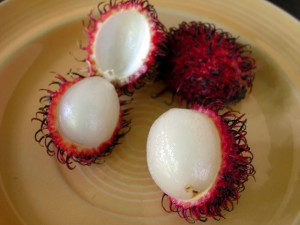 Ahem: From Ole Miss' spring practice report in the Clarion-Ledger. Emphasis, ours.

Receiver Shay Hodge missed practice because of sore knees and heels. He should be back soon. Receiver Andrew Harris (who had the dreaded ruptured testicle) was back at practice and made a few nice plays.

Oh, my. Congratulations to Andrew Harris for overcoming the ultimate injury. We now thank your creator of choice for this not being a chronic injury, as it would be very difficult to read "NFL player retires due to chronically ruptured testicle" without tittering with laughter the entire time. Les Miles had the same problem, but insisted on having the offending orchid removed while he relied on his seven other testicles to pick up the slack.

Also, speaking of sheer testicularity, Aaron Hernandez has been angling for ownership of the Percy Harvin four-balled Jock Strap of Champions for this year's Florida team, being generally uncoverable in practice and letting Charlie Strong know about it by name.

After making one catch down the sideline, Hernandez said to defensive coordinator Charlie Strong, "Don’t try me, Strong."

Don't make Charlie unbutton the top button on his polo, Aaron. You won't like him when he wears a shirt like a normal human being. Tweaks in the Gator offense get the Barnhart treatment, covering much of what you knew--the I-formation will exist again, the o-line is building depth, and Tebow's throwing motion is faster--and a bit you didn't, including the introduction of a semi-hurry-up and packages designed specifically for qb John Brantley.