Christopher Hitchens was paid $45,000 for one night's work in Miami for the 2009 BCS National Title game by ESPN's Page 2. The piece was judged unusable, and has not seen the light of day...until now. Enjoy. 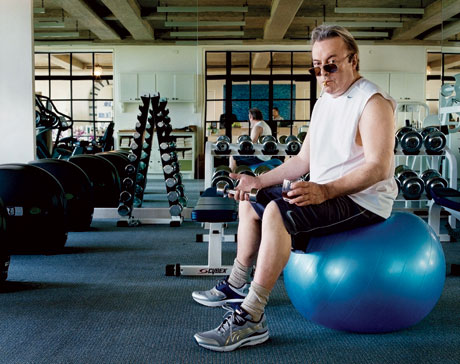 It is a notable coincidence of history to watch both Oklahoma and Florida tussle tonight on the same date that Abdul-Aziz-Ibn-Saud, puppeted Bedouin thug, murderer, tyrant, and happy patsy for the post-1900 colonial proxy octopus, named him self king of Hejaz, a barren waste of sand and camels invented on the spot and renamed "Saudi Arabia." (A humble piece of nomenclature, that.)

[/guzzles entire bottle of sherry, tells crowd below pressbox to "fuck you.".]

Like the tyrant who conjured a territory whole from the aether, so have we on this field two imaginary kingdoms wrenched forth from geographic oblivion.

Florida, were it not for the intervention of a few real estate scamsters in the '20, the discovery of insecticide, air-conditioning, and the generous slathering of federal pork upon the state's snake-infested swampwaste, would have descended into a kind of Sun Belt Lord of the Flies scenario, I think. I must also admit this may have happened despite all the best efforts I described in the following sentence.

[/berates Pat Forde for his lack of concern over the Cypriot situation, loses control of shirt-tail in process and exposes huge, Scotch-built belly. Calls Bruce Feldman "A closet Trotskyite fascist" for no particular reason.]

Likewise for Oklahoma. I know little of the state, but assume it is like Saudi Arabia, but with sod in place of sand and methamphetamine-riddled lumpenfolk in place of berobed tribesmen. Their obeisance to an imaginary, cruel, and violent despot of a nonexistent god is the same. So is their dependence on a single natural resource they neither created nor had the gumption to discover themselves. I suspect I shall not be traveling there soon.

Yet this American spectacle exists.

[/funnels twelve beers in parking lot with Florida fans, writes 15,000 word piece on liberal guilt, Russian policy, and this one time he and the staff of The Nation got drunk on brake fluid and threw batteries off the roof at the passing limousine of the Sudanese United Nations delegation.]

I know little of Tim Tebow, either. He appears to be large and fond of the noxious brand of fundamentalist Christianity confusing random athletic gene assignment, thanking his god in the manner of a suckling pig begging the freshly sharpened ax for forgiveness. If he wishes to live in his own spiritual Pyongyang, overseen forever by a nagging and sadistic parent, he may do this. That I should acknowledge his religion through the vehicle of appreciating his considerable athletic talents is a fallacy I cannot purchase nor endorse. Not one, thank you very much.

[/proclaims that if Bear Bryant was given an enema, he "could have been buried in a matchbox," gets jaw broken by a clearly inebriated Paul Finebaum. They become swift friends three minutes later.]

Florida wins, 24-14, in a battle decided by a Florida defense as thick as the skulls of those currently bemoaning the altogether beneficial invasion of Iraq, and by an Oklahoma quarterback as deluded as those who believe in the slavish cult surrounding Mother Theresa. Let us now hope the bars of South Beach provide less resistance, as I have female company to entertain, and though she is already quite willing, I hope to boom her sooner rather than later.