CAN'T I DO MY SIGNATURE NUMBER "WE READY?"

Share All sharing options for: CAN'T I DO MY SIGNATURE NUMBER "WE READY?"

The Miami Hurricanes' former wide receiver, Lamar Thomas, has been many things, including convicted tackler of pregnant women, fired announcer, strippee, successful college wide receiver, and long-term resident on the NFL's injured reserve list in his pro career. He also has his own adjective. 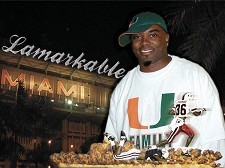 He now may add another job title to that illustrious list:

Staff members are in some key roles too: Assistant Principal Blake Bennett stars as Mrs. Darbus, the drama teacher; Lamar Thomas, the school's basketball coach and former University of Miami and pro football player, is playing the part of Coach Jack Bolton

Lamar Thomas will be playing a part in Boynton Beach High School's production of High School Musical. We're inviting all of you to join us at the production to challenge Lamar Thomas to a fight mid-show during his stunning musical number "We Ready," where we will throw a helmet at him, grab our nuts, and then demand he demonstrate his manhood. If he stays in character, we'll give each of you a dollar, which you'll never get because you know you don't come into Boyton Beach and talk that stuff without getting your butt whooped.