WE HAVE AN EXCITING NEW OFFER OF AWKWARD FOR YOU

Share All sharing options for: WE HAVE AN EXCITING NEW OFFER OF AWKWARD FOR YOU

Peyton Manning finally met Lane Kiffin. As Clay points out in his dialogue between the two, the meeting appeared to take place in one of Saddam's palaces, or perhaps in David Bowman's final room at the end of the universe from 2001. 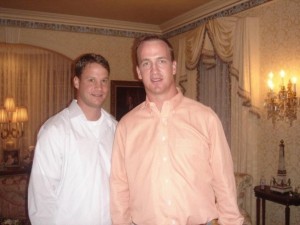 There has been no picture of Kiffykins and Fulmer together, as the two have "missed each other" and haven't had time to sit down and stare blankly at each other yet. (Awkward rating: somewhere above "discussing pregnancy with your wife's real babydaddy in a legal setting, somewhere below "meeting the man who murdered your parents.")