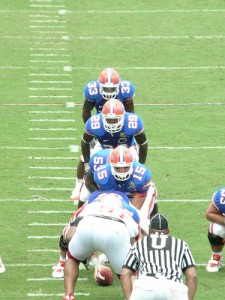 See? It can be done.

Something's been bugging us about any and all commentary surrounding the I-formation in Florida's playbook, and we have to take a moment to swat it out of the sky like King Kong batting away a hapless biplane.

The I-formation isn't anything new in the Meyer playbook: it's been there all along, and was first cracked out at Florida after the 2005 LSU debacle where Chris Leak struggled in the spread, Florida lost despite LSU handing the Gators multiple turnovers, and Urban Meyer cried after the game. (DURRR FAGG KRY!!! There. We said it for you.) Its reintroduction this spring is nothing new for the offense.

This is one of those tweaky little football things one would assume is very simple (i.e. Mike Leach's "I can teach a pro qb to take a three step drop in an hour" thing,) but is actually more difficult than any coach would like it to be. Tebow's new center this year will be Maurkice Pouncey, who as a new center has quite enough piled onto his learning curve already. Relearning how to snap in the tiny window of practice time available already is likely too much for Meyer to really want to mess with beyond experimentation.

(We know as much--don't seem shocked--via actual football-like sources. Don't look so shocked. They don't mind talking to us as long as we're never seen in public with them, and we pretend we don't know them in social situations.)

There's also the matter of fullbacks, h-backs, tight ends, or other people providing the primary block out of the backfield for a tailback. Right now, Florida has no one doing an adequate job out of the backfield for this, meaning the position of the Latsko-back (named for universal football solvent and all-around badass Billy Latsko, who played the position in 2005-6) is empty. Personnel-wise, the I-formation on the depth chart looks less like it's name, and more like the colon formation: two dots with an empty space in between. (And the results would be appropriately shitty on the field! Hat-CHAAA!!!)

Moreover, steaming along at 40 plus points a game, Florida doesn't need it. It would allay sub-mongoloid NFL scouts about Tebow's abilities, but frankly that's not something a coach should be concerned about if they want to keep their sanity or respect for the rest of humanity. Matthew Stafford is as perfect an NFL prospect as Disco God has every put on this planet: huge, cannon-armed, versed in a drop-back passing offense, and cognitively capable of doing whatever is asked of him re: a playbook. And even he's getting scrutiny beyond the pale of what might reasonably called sanity.

They're going to hate him anyway, so you might as well run your offense and let talent and ability win out in the end. The rest will be twirling and prancing to please a critic whose favor you cannot by design win.