We join Jim Tressel in mid-press conference on the Big Ten Network. Let's pop in and see what he's saying!

Jim Tressel: We've got a lot of people to replace on this team. Can you imagine how you guys would feel if you lost a third of the people in your company?

Tressel: Yeah, except we can replace our guys.

Tressel: Wait, there really are fewer of you. I just thought you were all out filling out law school applications, getting gastric bypass surgery, but good great googly moogly--it looks like someone served plague for dinner last week in here.

Reporter1: It's been hard.

Tressel: (Laughs.) I'm sure! (Laughs again.) Yes, I'm sure it has. Hey, what happened to your little dictaphones?

Tressel: That looks like one of those pencils you write down a golf score with, Tim.

Tressel: Yeesh. Not even the good ones. So no photos either? So if I did something really quickly-- 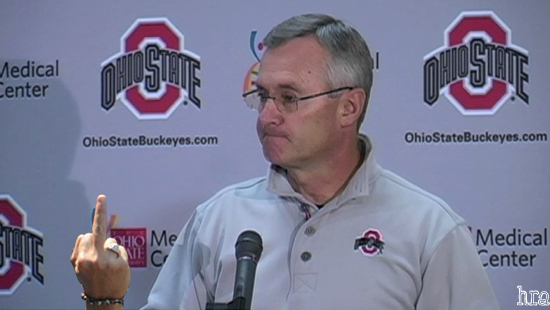 Reporter1: Nope. Didn't get it on our cell cameras, either.

Tressel: How about if I talk really fast and put on a cheerleader's outfit real quick? Like this? 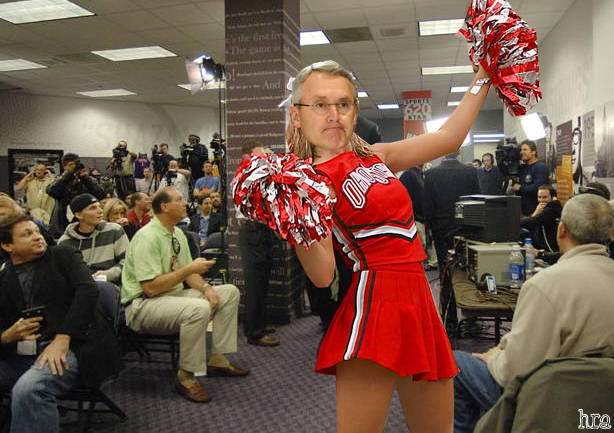 Too fast? Need me to say it again?

Reporter2: That would be nice, coach, if you could, and keep the cheerleader's outfit on...

Tressel then slides into a one-piece sweatervest and slacks jumpsuit in seconds.

Tressel: Ha, I have no idea what you're talking about, Bob. Didn't hear a thing! Hey...will you guys do things for money now? You have to be poorer than I can ever remember being now that all this has happened.

Reporter3: I'm insulted by this, Coach. This is--

Reporter2: Shut the fuck up, Ed. What kind of money are we talking about?

Tressel: Attaboy, Tim. What I'm going to do is make you dress up in my burro costume. Then together we will ride. Like a loyal, sweet burro! That's what you'll be. And the rest of you are going to sketch it on your stolen La Quinta stationery and put it in the paper tomorrow.

Tressel: And you'll wear this saddle?

Reporter2: A hundred and I'll sing in Spanish.

Reporter2: [sighs and grieves for all he once thought he would be] Deal. 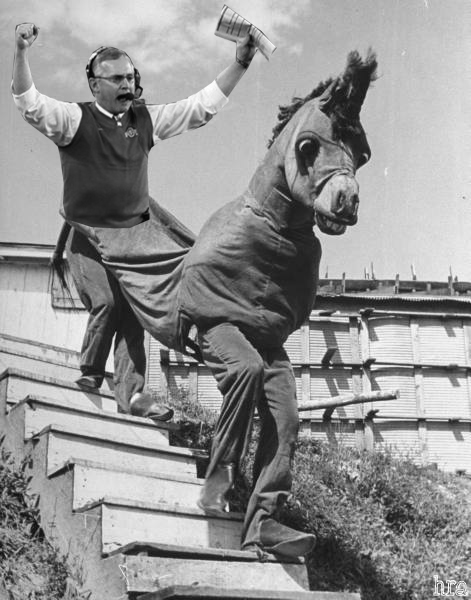 Reporter3: [Wishes self out of existence with an audible 'POP']