Share All sharing options for: O-H! I-OVERDRIVE ON A BAR STOOL GOING 35 MPH.

We don't know if this man was an Ohio State fan, but...he was. It's a biblical certainty. 30 miles east of Columbus, police found what could only be properly described as "The gloriously fractured wreck of what was once the most majestic thing ever" on the side of the road: a barstool outfitted with wheels and a lawnmower engine capable of going 38 miles per hour. Near it: Kile Wygle, a 28 year old mangenius who not only survived the accident, but lived to help a reporter pen the most deathless paragraph ever typed into an AP wire report:

Kile Wygle, 28, was hospitalized for minor injuries. He was charged with operating a vehicle while intoxicated after he told an officer at the hospital that he had consumed 15 beers, police said. Wygle told police his motorized bar stool can go up to 38 mph. 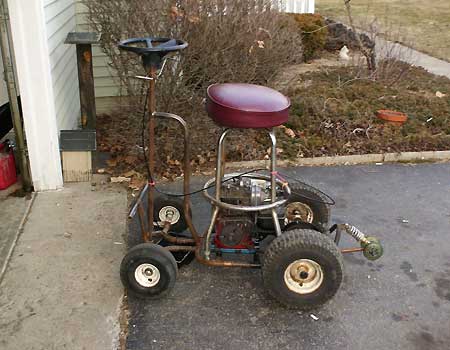 I don't even know you and I love you.

Note the complete lack of frill, invention, or counterintuitive design. It's nothing more than what it claims to be: a motherfuckin' barstool with wheels, a lawnmower engine, and a cartoon steering wheel attached to it. It is about three practical details away from the cartoon that pops into your head when you imagine "barstool with wheels." For this reason alone, the Homer-ity of the invention, it attains a kind of Platonic idealistic greatness. It's so completely fucking stupid that it had to exist, and could not be denied from inception forward.

Also, police note that he had to be an Ohio State fan, both because he was pepper sprayed repeatedly without effect, and because Wygle crashed in an effort to keep up with a guy on another motorized barstool with unspecified SEC markings on it.

We gave out cocktails yesterday, but sometimes you have to go back-to-back with the plaudits when life gives you the Awesome Double Shot: ONE HUNDRED COCKTAILS TO YOU KILE WYGLE. Your greatness is now a fact of science, and let no one question this.