FULMER CUPDATE: THE BIG BOARD IS NOT A COP, NOPE

Share All sharing options for: FULMER CUPDATE: THE BIG BOARD IS NOT A COP, NOPE

This week's Fulmer Cupdate is sponsored by the Hawaii Board of Tourism, who reminds you that if you have to collapse and crawl across a finish line while soiling yourself and stinking of ammonia, why not do it in paradise? It is brought to you by Brian, who is hung like Reggie F'n Nelson. 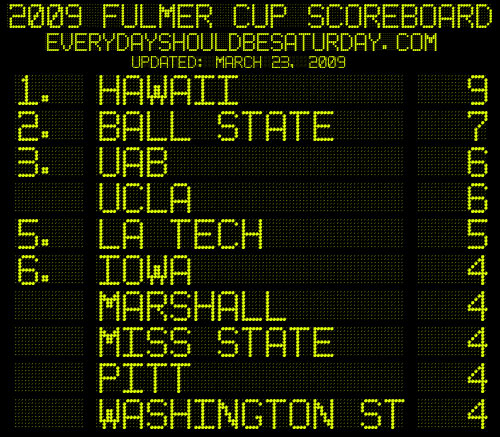 Hawaii: Also Reminding You That You Probably Won't Get Sexually Assaulted While You're There. Ball State is probably your true leader at this point thanks to the seven-point indictment of JoPierre Davis, the cornerback whose nine point score just got a lot, lot bigger. That nine? It's going to get larger, meaning JoPierre's charges are the sole score for the Warriors, and thus eligible for the Ellis T. Jones award for outstanding achievement.

Now, if someone else on Hawaii gets frisky and decides to begin groping strangers willy-nilly, then we're talking about an eligible team. However, it's not fair to put a team in the lead with just one guy pulling all the weight, feloniously speaking. We have to track down which ones of these counts are felonies and misdemeanors, but when the charge "third-degree promotion of a detrimental drug" is a tiny extra on your list of misdeeds, you did something to piss off the D.A. properly.

I'm not a cop ha yes I am funny game that way. Relationships are important. This is why you never let a good weed dealer out of your life, and you never, ever, whore around your pharmaceutical dollar on the streets. Ladi Ajiboye, South Carolina defensive lineman, earns the Cocks two points for attempting to buy weed off an undercover cop, something he wouldn't have had to do if he just hadn't let that special if often late person out of his life. Lessons: life will teach them to you, even if you're too high to remember them at the time.

Your Second DUI Is Just When You're Getting Good At It. Pitt WR T.J. Porter decided to go a-motoring after having a few old-fashioneds while giving his driver the night off, starting an evening of festive driving in a manner disturbing to most of the residents of Toad Hall. This being his second offense and done on a suspended license (a gentleman cannot be expected to keep up with such details as petty paperwork), Porter was suspended from the team, and given a commoner's charge of DUI (two points,) driving on a suspended license (one point,) and a bonus point for getting two DUIs in a year and being unfairly martyred for driving whilst in a blissfully relaxed state. Total of four points deeded to the Pitt Panthers. Behave, knaves.

Bayou Brawlin'. Finally, five points to the La. Tech Bulldogs for one felony battery charge, one assault charge, and one disorderly conduct charge in a fight of some sort at Rabb's Steakhouse in Ruston. As long as the guys didn't cause the cancellation of Zoso, the Led Zeppelin Experience this coming Thursday, all is forgiven.