Your Fulmer Cupdate is brought to you by Rampage Jackson, who reminds you that black on black crime is acceptable only if it gets his belt back. The board is Brian's; his pants bulge with a manliness only Reggie Nelson finds comparable to his own. 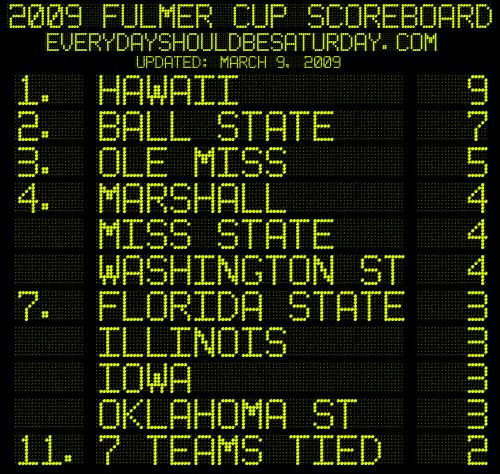 Clarifications and Award of Points.

Jamar Hornsby: Synonymous With the Word "Charges" Again. Ole Miss's prize transfer Jamar Hornsby left Florida after using a dead woman's credit card for gas money, which could have been a misunderstanding, and let's just give this young man another chance before stamping him with the official USDA approved "DUMBASS" stamp.

Break out that bit of bureaucratic labeling machinery, please; Hornsby was charged with aggravated assault (Felony, three points) and petit larceny (Delicious French misdemeanor, one point) in a brawl in Starkville, MS this past weekend. Our crack sources* tell us that Hornsby was engaged in a hella nasty lopsided fight resulting in some serious injuries, meaning he was not only malicious but unsporting. (All fair fights with lopsided odds should unfold as they do in kung-fu epics: one at a time, please.)

Thus one bonus point for being a repeat offender along with the four charged points for a total of five points for Ole Miss. After a quiet spell under l'Orgeron, Ole Miss has become a contender in both the season and off-season. GIGGITAH.

It is Huntington, WV. From this week's Economist:

"Consider the shoppers at the Save-A-Lot supermarket in Hamlin, West Virginia. At the beginning of the month, when the food stamps arrive, they snap up buckets of lard so big that the label says: "Warning—Children can fall into bucket and drown." The manager, Key-Ray Adkins, shrugs: "People now say lard isn’t good for you. But it’s what we grew up with."

Hamlin is near the Huntington metro area, one of the unhealthiest in America. Some 77% of adults are overweight; an incredible 46% are clinically obese. Some 13% of adults have diabetes, 22% of those over the age of 45 have heart disease, and nearly half the over-65s have lost all their teeth."

What with the gurgling cries of children drowning in lard and the crushing noise of the residents cracking sidewalks, why not block out the noise by getting baked in your dorm room or getting hammered in public to cope with the madness? Also, should you engage in illegal behavior, the chances of the morbidly obese citizens catching you on foot is highly unlikely.

If Marshall's Fulmer Cup offenses could be described as an offensive style, they'd be closest to the late-stage Bill Walsh West Coast offense: short plays where they just get the trouble ball in the hands of playmakers with small charges. It nets them a total of four points here, and reminds us of Marshall's solid long-term performance in the FC markets. Invest now.

Stricken: tOSU's points awarded last week for weed possession, as charges have been speedily dismissed by Circuit Court Judge Tressel. Or someone like that.

UPDATE: Hornsby used brass-knuckles on a drive-through employee. He also was not enrolled at Ole Miss, so the points will not count. Hornsby also faces up to 20 years in prison.