EVERYBODY RELAX. CHARLIE'S ON THIS THING.

Share All sharing options for: EVERYBODY RELAX. CHARLIE'S ON THIS THING. 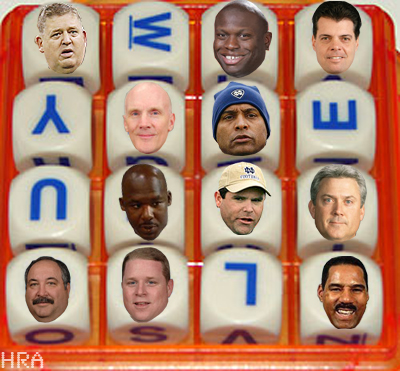 By their count, the Irish have lost three coaches, gained five, and shuffled the positions of another five. And brace yourselves---Pear Bryant has crowned himself OC for the coming season.

"I thought the best chance for us to win this year would be to make me the offensive coordinator," Weis said. "What that's done, though, is it's caused a trickle-down effect in configuration of our staff."

The promotions also make it possible for Weis to coach from the press box while Brown runs the sidelines if they decide to explore that option.

Fan of college football in general, rejoice. This is a gift rife with potential. After all, everything went so very swimmingly for the Irish last year when Weis decided to take more of an active hand in playcalling. ("But Hawaii---" No. No crowing over waxing a team that managed a 7-7 finish with a WAC schedule.) And fear not---if it doesn't work out, he can always blame his wife.