Monday's Sherrill Cupdate, which tallies the offseason recruiting violations of Division I programs, reported that the University of Tennessee had utilized a smoke machine to simulate a gameday experience in Neyland Stadium for prospective players. We have since learned that the apparatus in question was not a smoke machine, but an active volcano created when recruiting coordinator Ed Orgeron punched through the ground to the Earth's molten core. We regret the error. 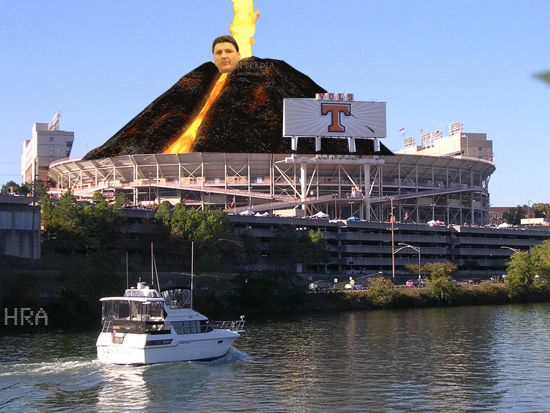 In Wednesday's Get Skintimate With the Stars Series, we inaccurately reported that USF coach Jim Leavitt uses "a combination scrub of Aveda's Face Wash and Lush's Cupcake face mask to care for his skin." This is inaccurate, as Leavitt exfoliates solely with the use of a round of rock salt fired from the barrel of his custom built green, white, and yellow M4 Benelli Tactical Shotgun. It is Arkansas coach Bobby Petrino who uses the Aveda/Lush combo. We regret the error.

On Tuesday, we quoted commenter "THEOSUfann84" as saying, "I'm sorry, but I hope Rich Rodgriguez stays at Michigan forever". Further research by our staff indicates that not only is "THEOSUfann84" not sorry, at all, but that living in Columbus has robbed him of all sense of time and space and thus the concept of infinity. This was clearly a poorly chosen source, and we regret the error.

A Monday piece entitled "Our Book: A Preview" included the following passage with some altered elements:

So even now with the cloud of fear around her, while he taunts her and abuses her - even now her pleasure is not mere mild enjoyment but the perennially re-created bliss, and chill waves shiver down her back as she sucks and sucks and sucks. She is not even surprised that the more he torments her scalp, the more he goads her with the detested "Irma," the more gluttonous becomes her lust to swallow up his price, and when she ceases, just for an instant, and panting raises her head and gasps "Oh God, I love sucking you," the words are uttered with the same uncomplicated and spontaneous ardor as before.

The passage is not from Orson Swindle's unfinished but soon-to-be-published piece of football erotica entitled "Pornge and Blue," and is in fact from William Styron's Sophie's Choice. Also, in the passage on Monday, "she/her" referred to Notre Dame, and "he/him" referred to USC. We did not realize the passage was plagiarized, and regret the error.

Thursday's Foobaw Word Scramble solution was incorrectly revealed as STEED LOBOTZKE IS THE LIGHT. The correct answer is JOKER PHILLIPS IS THE LIGHT. We regret the error.

Friday's Curious Index included a note on Lane Kiffin's firings since he has become coach of the University of Tennessee. Those listed included:

24 secretaries
32 chauffeurs (his current one has been sewn to his seat, and is intubated for convenience)
2 University Presidents
7 Masseurs
9 Smokies
16 groundskeepers
1 Johnny Majors (five times from nonexistent positions)
1 Johnny Majors Drinking Problem
The moon
An employee of McDonald's who mocked him for ordering a McGriddle
The McGriddle
Shoeshine Johnnie (NOOOOO! NOT SHOESHINE JOHNNIE!!!)

Lane Kiffin has in fact fired no one, though he did kick a snack machine so hard he got a free bag of Baked Lay's this week, and that should have sent a clear enough message to everyone that he's TUFF GRR.

On seventeen separate occasions this week, a staffer referred to Florida State University as "Where Talent Goes To Die". The slogan was unintentionally abbreviated in the EDSBS Stylebook, and should read "Florida State: Where Talent and Jimbo Fisher Go To Die." We regret the error.

Wednesday's profile of Jesse Palmer should have listed his favorite flavor of soda as "Grape." We regret the omission of the 'G,' and apologize for any emotional distress this has caused Palmer and his family. We deeply regret the error.

ADDENDUM: In this morning's first edition of the Corrections, we reported that Ed Orgeron constructed a live volcano in Neyland Stadium to use as a recruiting tool. We have since received new information indicating that Orgeron was not aware of the geological havoc he had wrought, and thought it merely an unseasonably warm afternoon. Further reports indicate that he has decided to employ the volcano in sprint workouts, and that fifty-six players and support staffers have perished in the last three hours. Orgeron attributes these deaths to a lack of conditioning, something he intends to rectify within the coming months. We regret the error.