Share All sharing options for: FULMER CUPDATE: THE X RECEIVER STANDS FOR XANAX

Xanax is fantastic stuff. Known off-brand as Alprozalam, Xanax is a prescription benzodiazapine used to treat depression and anxiety. If you're neither, taking one is like applying a sledgehammer to front of your skull. We took one immediately after closing on the house because we couldn't asleep; when we awoke, we had a long beard and erudite apes with British accents were in charge of the planet. Xanax, boy, don't play.

Neither will Oklahoma State receiver Bo Bowling after being arrested for felony drug possession with the nasty "intent to distribute" tag. Bowling was busted in possession of marijuana and Xanax, meaning Stillwater must be a far more stressful place than we imagined. Oklahoma fans: it's because of the packs of wolves roaming the streets! Oklahoma State fans: of course there aren't wolves roaming the streets. You prefer the term "Okie Porch Rushing Spaniel," and that's fine with us if it makes you happy.

According to Wikipedia, Xanax's side effects include aggression, mania, hallucinations, and depressed mood. Hmm... 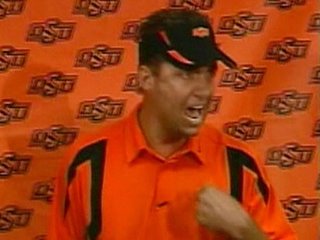 This picture is not here. Nope.

Oklahoma State earns three points in the Fulmer Cup for the felony charge, though that is more of a placeholder than anything else: Bowling actually faces three charges, and if each is a felony then OSU could be awarded a total of nine points in all. Bowling has been suspended from the team pending the results of the criminal investigation, and seems remarkably and mysteriously relaxed about the whole affair.