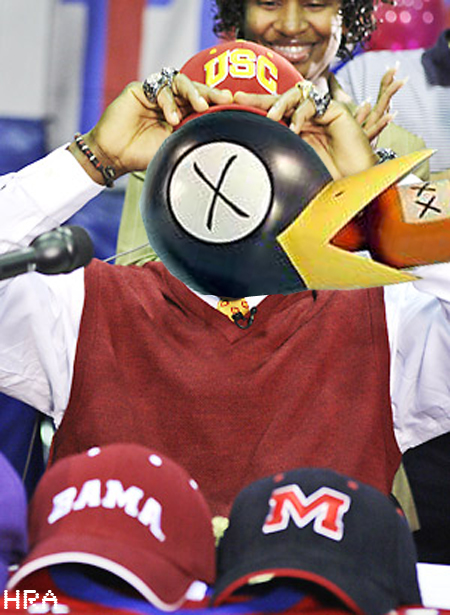 Holly and ourselves are divvying up the comic prospects for the year today in our own signing day. We're exhausted from the effort, especially given the effort and sailor-style drinking we had to go through to sign our first recruit of the day: Drinky Crow, who will be given standard go-to reference status for 2009. In case you wonder why you should love the story of a suicidal, alcoholic crow who sails the seven seas for no particular reason, let us remind you: his boon companion is described on Wikipedia as "a drunken Irish monkey who is only after girls and booze." If that's not good enough for your party, then take your dips and fine cheeses elsewhere.

--Texas has all 12 of their LOIs in without tomfoolery or subterfuge, and are now waiting on tenterhooks for Dre Kirkpatrick, an Alabama DB prospect, and Jarvis Jones, a Georgia DE to fill the Orakpo, "I can hang clean 380 pounds while sacking your qb with my mind" spot in Will Muschamp's defense.

--Freakboy safety Byron Moore goes to USC. WHY IS PETE CARROLL SO PRETTY? Moore, a 5 star graduate of Charles Xavier's School for Talented Youth, was a comeback victory for USC as Moore initially dismissed them a few weeks ago due to concerns about lack of playing time.