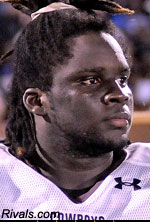 What his picture says about him: That though he may look like he's observing the action on the field, he sees so much more: the meeting of strategy, disorder, and desire; the simultaneous blossoming and death of youth embodied in 22 parts, and the ineluctable transient sadness of that crystalline moment. Also, he wants to know why you don't use him as a goal-line fullback and demonstrate his quickness and deft footwork on the offensive side of the ball, Coach Chump-pantsserson.

Position: defensive lineman, raconteur, firmly against the evil of corn subsidies, preferably sitting a wooded bower absorbing all the wisdom silence has to impart in him, wondering why his opponent began this particular game of chess with a Nimzo-Indian strategy, and wondering if the heart can truly love whilst in deep meditation in his dojo.

Spiritual Hometown: The world and not the world. A spirit knows no home and no foreign country simultaneously. Though if he had to choose, it would be probably be Miami, because they got some chunky asses down there for real, and even a poet-warrior hears the siren song of the flesh from time to time.

Squat: 475 if he's at one with things, but scarcely above 225 if melancholia has crept into the tender cockles of his heart, or if he hasn't eaten much that day.

Committed to: Florida State, the Dravidian martial arts, learning Farsi, preserving the great traditions of local musical cultures around the world, studying the arresting graphic design of Fallout 3, and preparing himself for death at any instant in order to properly live.

40 time: 4.9, but doesn't really think of time as a real variable, but more as a human construct imposed on a timeless universe.

Things you Didn't Know About Jacobbi McDaniel. Parents included two 'b''s in his name to remind him to always strive for an 'A'...has a foolproof system for winning at roulette and would be happy to share it with you through an informative and entertaining DVD available for just $69.95...once concussed Paul Krugman in a heated dispute over the theoretical validity of the Laffer Curve...does not use wasteful food as fuel, and instead runs on frequent injections of clean-burning hydrogen...is not visible from space, but can felt in the heart from as far away as the Van Allen Belt.