OVERLOOKED QUANTITIES IN COLLEGE ATHLETES IN THE DRAFT: SLOWS

Share All sharing options for: OVERLOOKED QUANTITIES IN COLLEGE ATHLETES IN THE DRAFT: SLOWS

Slows: they're truly rare. Some players may flirt with slows, and others may have sluggish periods in their history, but the prejudice towards "speed" and "agility" has unfairly pushed the rich and luxurious pleasure of slowness to the side. 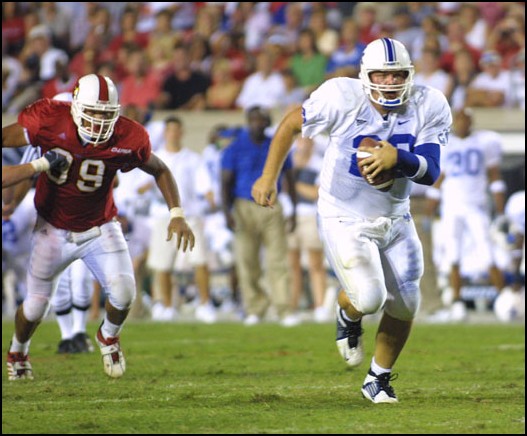 The luxurious running of the great Jared Lorenzen: slows at their most beautiful.

We speak of course about his astonishing, unreal slows.

An athlete with compelling slows cannot merely run slightly behind the pack. No, he has to have the special talent to make the average look quicksilver, to make thin air seem like knee-high mud he is mired in, to make even the mundane act of taking a snap seem like it's taking place in an underwater football game observed through the glass of an enormous aquarium. He has to make continental drift look like rabbits fucking. He has to make sloths impatient. He has to be...dare we say...Marino-esque.

As an athlete with 6.09 speed, we know this from experience: slows are something you're born with, and cannot acquire as an adult. It's something you just have--ask Jared Lorenzen, a qb who broke loose from the huddle like a chunk of glacial ice slowly shearing off and splashing down into icy waters, or the great Chris Weinke, whose immense slows contributed greatly to the success of the FSU offense at the turn of the century. (Having no ability to go anywhere, he had to hang in the pocket. Running was not ill-advised, so much as it was not an option.)

Bringing us to Todd Boeckman, the Ohio State qb gently described as "very immobile" by NFL scouts. Own that, son. When they make line you up at the combine...power-walk that motherfucker. Then throw a perfect bullet of a deep out through the nearest 300 pound scout and walk away to the nearest fast car. (Because you've just committed murder, and you're not running away from anyone.)