We got a text message immediately after the Jeff Jagodzinski affair surfaced that read: "If Boston College were a girl, she's have those crazy girl bangs right across the forehead." Just like that girl, the one who dumped Jeff Jagodzinski for so much as flirting with another lady, someone else is stepping into that bear trap foot-first: the nice guy who hung around long enough to finally hook up, BC defensive coordinator Frank Spaziani. 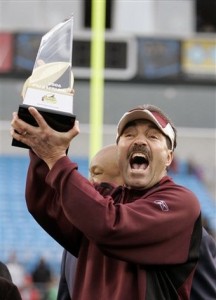 Spaziani, seen here seconds after being shot in the ass with a spear gun by BC AD Gene DiFilippo, who thought he was looking at another woman in the stands.

Spaziani knows the particular bear trap he's stepping into, and will likely not flirt with any other ladies UNLESS HE WANTS TO DIE IN HIS SLEEP AND YOU HAVE TO SLEEP SOMETIME DON'T YOU FRANK?!?! [/brandishes scissors.] Spaziani produces extremely good defenses, is beloved by players, and has been at BC since 1997. At the age of 61, he's not likely to be promiscuous or even flirtatious with other programs, though he should share his password to his email and voicemail because YOU WOULDN'T BE HIDING ANYTHING FROM ME FRANKIE BECAUSE I LOVE YOU AND WOULD KILL MYSELF AND MAYBE YOU AND YOUR DOG IF YOU SO MUCH AS LOOKED AT ANOTHER WOMAN OR FOOTBALL PROGRAM FRANK I LOVE YOU SO MUCH.