IN A WORLD where sometimes life doesnt go the way youd planned . . . 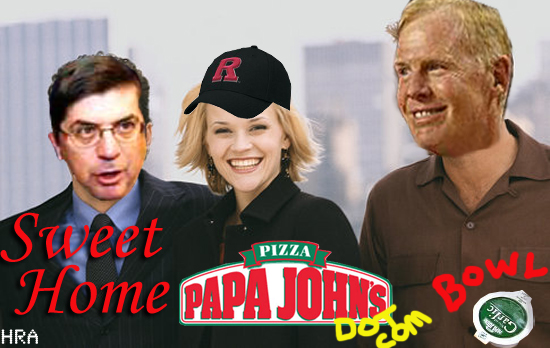 A vast, severely furnished editor-in-chiefs office on the 32nd floor of a Manhattan skyscraper. Big East commissioner MIKE TRANGHESE sits behind a black lacquered desk, regarding RUTGERS with a critical eye.

TRANGHESE: You were one of our rising stars. Three straight bowl appearances, an 11-win season, this close to a BCS bid . . . what happened to you?

RUTGERS: Just a string of bad luck. Honest. Give me a few more weeks, I can turn it around! . . .

TRANGHESE: (shakes head gravely) Id like to believe you, Scarlett, I really would. But you lost to Fresno State by 17, UNC by 32 . . . and we just dont have that kind of time.

RUTGERS sits dejectedly in a crowded, chaotic airport terminal. She is shaken out of her melancholy by the abrupt squawk of a PA announcement.

GATE ATTENDANT: Ladies and gentlemen, wed like to begin boarding all rows, all sections for flight 4358 . . .

RUTGERS looks up, waiting for the words.

ANNOUNCER: . . . when things are going South.

A taxi pulls up to Legion Field and RUTGERS, Prada bags in hand, steps out. She casts her eyes to the upper deck, where a WELDER is noisily repairing the decrepit structure.

The WELDER stops his work and flips up his mask: Its TOM OBRIEN, redoubtable coach of the North Carolina State Wolfpack. He regards RUTGERS as if to say, The hell do you want?

RUTGERS: Is this  Legion Field?

OBRIEN: Congratulations, somebody knows how to use a map.

RUTGERS: They dont actually expect us to play here, do they?

OBRIEN: Its this or Hoover High, princess. How bout you climb offa that high horse of yours, pick up a torch and start helping me make sure this rustbucket dont collapse and kill someone.

ANNOUNCER: Starring Reese Witherspoon as Scarlett Knight, the hard-charging New Yorker whos about to find that life in the Magic City moves at a slightly different pace . . .

Now blue-jeans-clad and grimy, RUTGERS storms away from the stadium to find Birmingham mayor LARRY LANGFORD standing on the sidewalk with a Papa Johns pizza box, munching on a slice of pepperoni-and-extra-cheese.

LANGFORD: Youre not quittin yet, are you? We gotta get this thing ready in time for the Olympics in 2020!

ANNOUNCER: . . . and John C. McGinley as Tom OBrien, the gruff veteran coach who reminds her that sometimes the most important things in life are right under her nose.

Late night, almost time for last call, at a dive bar in Birminghams Southside. SCARLETT and OBRIEN are nursing PBRs over earnest conversation as the jukebox murmurs a lonely Patsy Cline song in the background.

OBRIEN: Are you the team that got your ass kicked by the Tarheels, or are you the team that threw 20 TDs and only five picks over the last six games of the season? (beat) Youre tryin so hard to convince everyone down here who you are, sometimes I dont think you even know yourself.

ANNOUNCER: And a special appearance by Cedric the Entertainer as wacky Mayor Langford.

LANGFORD: (bursts in) Ive got it  we build a gigantic launch pad where the steel mills used to be, and its hel-lo, NASA! Tommy, get your welding torch!

ANNOUNCER: On December 29, its all about finding touchdowns, love  and pizza  in the last place you thought to look. A place otherwise known as . . . SWEET HOME PAPAJOHNS.COM BOWL.

The Papajohns.com Bowl  no, not the Papa Johns Bowl, it is, in fact, sponsored by their Web site  opens at 3 p.m. Eastern on Monday, December 29, and will be more entertaining than standing in the Returns/Exchanges line at Target for three hours. At least, we can hope.