IN A WORLD where a gun and a badge separated chaos from order...one man... 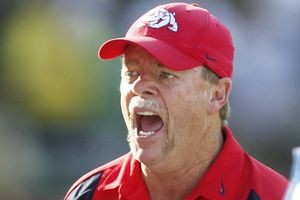 ...will ride into town on the back of a horse with no name. Or one named Brandstater. Whatever. To face an opponent with nothing to lose... 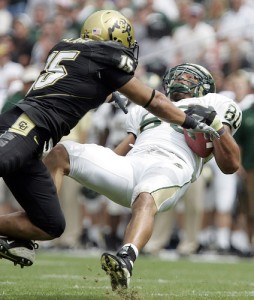 ...except their honor (and their seventh game on the year.)

Shadowy scene with Pat Hill. His shadow falls over the down-on-his luck gunfighter COLORADO STATE waking up drunk in the gutter. The music from Unforgiven plays in the background.

Hill: Don't think you belong here, stranger. We don't take to your kind 'round here.

COLORADO STATE: Just because I'm not New Mexico doesn't mean I don't deserve to be in the New Mexico Bowl, Sheriff.

HILL: Deserve ain't got nothin' to do with it, son.

ANNOUNCER: On the range, there's only one kind of law...

HILL: I can't have him in this town. They were fourth in the Mountain West, Nellie Mae.

NEW MEXICO BOWL: (Pours shot of rotgut for HILL.) Be careful. They've got Gartrell Johnson at running back, and you allow over 5 yards a carry

HILL: I can take care of myself. I just worry about...you...

The two men face each other in the street.

CSU: How'd a dark horse BCS contender like yourself end up here, sheriff? Huh? Answer that?

...and in his comeback role he actually became a ram to play, Lou Diamond Phillips as Colorado State University... 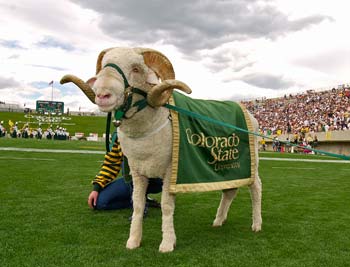 "Phillips is so good, you'd think they just put a sheep on the set and dubbed dialogue afterward."--Roger Ebert.

..and Heather Graham, who would get naked to do vocal parts for an animated film, much less feel any scruples about dropping trou on the street to get attention, as Nellie Mae, the New Mexico Bowl whore with a heart of gold...

This December...the bullets will fly, mostly because both defenses can be sort of hapless at times and allow close to 30 points a game, THERE WILL BE BLOOD. (Editor: We don't want people thinking this is some boring talkfest ending with a bowling pin murder. How about "THERE MIGHT BE BLOOD?")

THE NEW MEXICO BOWL. Because justice needs no sponsorship. (Gunshot!)

(Editor: better. Get Don Lafontaine's agent on the phone. Wait, what?)

The New Mexico Bowl sponsored by Your Mother airs at 3 p.m. on ESPN. It features Colorado State versus Fresno State, and will be announced by Joe Tessitore and Rod Gilmore. You have to watch it for an hour before the magicJack Bowl comes on and rocks your damn face off with its Grohawktensity.