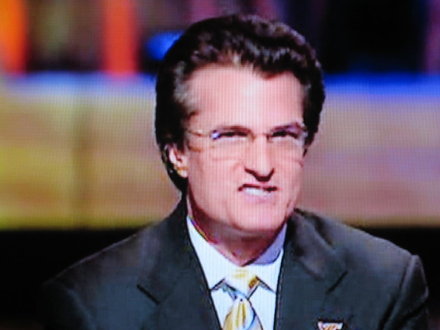 The draft is right around the corner, and I'm lining up the top prospects as we speak. Here's what I see when I look at the class of 2008 and their prospects in the league.

Tim Tebow, Florida. Should really move to tight end. No arm. No demonstrated ability to play the position like Matt Stafford. When I look at him, I see Eric Crouch, or Reggie Ball, but taller, white, and with a Heisman Trophy. Nice ball skills.

Brian Orakpo, Texas. A looker at defensive end and a workout machine, but the numbers don't tell it all. He's half an inch too short to put himself in that Julius Peppers-type-sort category, so I'd move him to cornerback, where his strength and ability to speak Portuguese will really help defenses lock down wide receivers. Also could do with a third arm sewn into his chest just for the fuck of it.

Percy Harvin, Florida. Percy Harvin's definitely a difference maker, the kind of gamechanger and factorback who makes things happen. His explosiveness after the run is explosive. Not many guys like that around. I project him as a 3rd round pick for the Baltimore Ravens at punter, since his speed and lack of durability put him in that Reggie Bush, ostrich-with-a-helmet-and-women's-panties-on kind of thing. You ever noticed how popcorn makes you thirsty? Me neither.

Taylor Mays, USC. Oh, a safety like this doesn't come around very often. Fast, physical, fast with his physicality and aggressivenessaciousness. Reminds me of a young Virginia Woolf before her patellar tendon went out on her. You gotta put someone like this in someplace special. I'd make him the harbormaster for the Port of Houston and get him a bennies package including dental, stat. An explosive talent like this needs a special place.

Zoltan Mesko, Michigan. A punter with composure and experience like Mesko's can't be taken for granted. Even though he's a punter, what I'd do if I were the Denver Broncos is take a late, second-day flyer on him, have him processed into animal food, and then fed to my favorite kitty. Don't sleep on a talent like this, or on nails, because it's harder than it looks.

Brandon Spikes, Florida. Solid middle linebacker, big thick trunk, runs through his tackles. His 40 time will be key: At a 4.62 or better, I could see him starting in this league for ten years. At a 4.64, he's using his anthropology degree to mediate interracial arguments in the express lane.

Shonn Greene, Iowa. He plays baseball, right? Just kidding. Iowa's running back is a guaranteed first round selection if he's willing to switch positions to Undersecretary of South Asian Affairs.

Curtis Painter, Purdue. Tough senior year, got caught in a bad situation. Benched for a freshman who started the season as a running back. I don't know what Purdue was thinking with this kind of talent in the pocket. Painter's got a terrific arm and outstanding mechanics, but what really separates him is his ability to take a snap from center and never leave the tackle box under any circumstances. He knows how to take a sack like no man I've ever seen; curls up like stunned armadillo and just lays there. Excellent open field slider.

Mel Kiper is a columnist for ESPN covering the NFL Draft. He's not just making shit up as he goes along, nope, no sir, because he is an expert. Additional dialogue by Matt Hinton, who doesn't understand what the hell happens in the NFL draft, either.