Last night Central Michigan trotted out "Vegas gold" uniforms, an inapt name for any shade of gold in Las Vegas. (Unless you're referring to the gold fingernail fungus that shows up when your immune system collapses in hour 72 of an 84 hour bender there. That's about the same color.) It leaned more toward the urine end of the spectrum, and with yellow you go Oregon "banana attack" or nothing, in our opinion.

So, hope then that the Missouri Tigers, already a tad down over losing two games they thought they could win and thus only being kings of the 493 billion square miles of the Big 12 North, avoid the pissy overtones when they trot out the "golden" unis they're rumored to be using against KU. The early projections are not...um...promising. 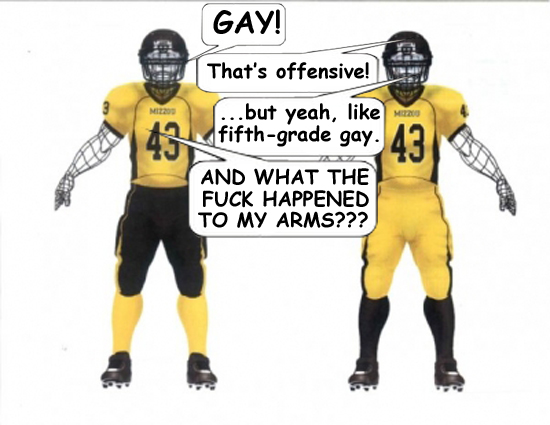 That's close to nail fungus yellow there. Of course, go too far and you get into food colors, and Mangino food association quick offramp to fat joke yes let's not go there we just did apologies.