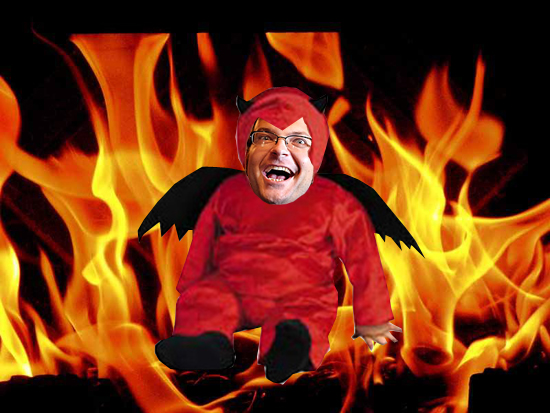 Who needs Mike Leach? He likes scoring points, and you know what happens when you score more than fifty points? You go gay, and if we can say anything confidently about the state of Tennessee, it's that it hates all things gay. (With the notable exception of Kenny Chesney.)

You know who is totally ungay in every way? JON GRUDEN. He's so ungay he burned down Disneyworld after the Super Bowl, sparing the Country Bear Jamboree because "Mechanical bears aren't gay." (We checked: dancing bears, gay; mechanical jug bears, merely "campy.") He's so manly he makes faces on the sidelines and has bravely sacrificed his fair skin in the name of coaching in the sun while wearing only a visor! GRRR MELANOMA!!! He looks like he's shitting out whole barnacles in midgame! You know it's intensity because it looks like intensity.

He's a great deal financially, since he's only making $4 mil a year in Tampa, an easy buyout by almost anyone's standards.* He also has head coaching experience, which isn't necessary, especially if you're Notre Dame, but it helps. There's a lot of ways to think about him: like Bill Callahan, but even more burnt-out while running the same indecipherable offense, or like a sober Johnny Majors without the ties to the university and ten times as expensive, or even like Phil Fulmer, but minus 100 pounds of body mass and plus hundreds of adorable freckles!

Given the successful track record of professional coaches at the college level, we therefore heartily endorse extremely un-gay, teeth-gritting, and highly affordable Jon Gruden for the Tennessee job. It's a slam-dunk! He'll stay forever!

This advice comes objectively from EDSBS.com and includes no ulterior motives. None at all.