THIS MOMENT IN GREAT BLOG ANGUISH...

Share All sharing options for: THIS MOMENT IN GREAT BLOG ANGUISH...

...is brought to you by WBGV, who opines on the bizarre offensive mutations of the formerly unstoppable Firecouchbone:

Do we not scout? Do we not have a gameplan? Do we not know what the other team is going to do and how to react? Do we not practice during the week and prepare? 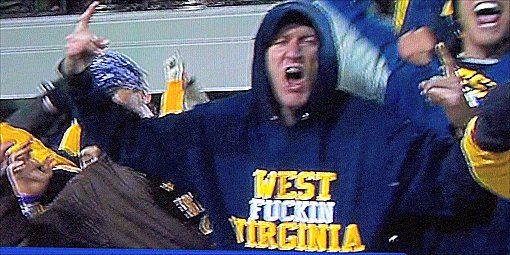 Ahh, the undeniable cri de coueur of a fan stuck in post-greatness coaching comedown. The fun for West Virginia fans looking for statistical poo to throw at their coaches is only starting: with Pat White, Dorrell Jalloh, and Jock Sanders, the offense has gone from the 15th in total offense in the nation to 72nd and fallen from 3rd nationally in 2007 to 14th overall in rushing offense.

The big emphasis on the pass Stewart mentioned before the season? Like-a-this?

"I think you'll see a more diversified Pat White," Stewart said. "He's a very good passer. The guy's got touch. He's going to be even more exciting for the game of college football."

The West Virginia passing offense ranked 114th in 2007. The emphasis on the pass has improved them to 106th in the nation, or ahead of only Syracuse in the Big East in that department.